The Syrian regime has uncovered a mass grave in eastern Ghouta containing what is believed to be the bodies of civilians and security personnel reports Al-Araby Al-Jadeed. 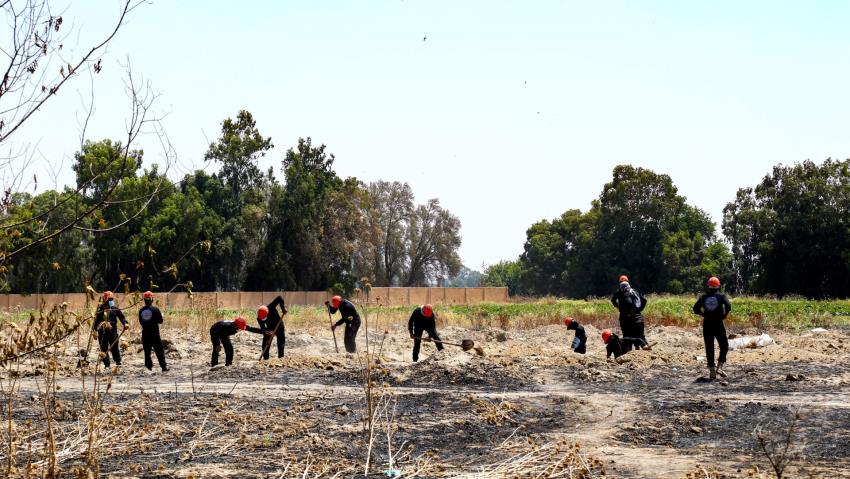 Syrian media said on Monday that regime intelligence have discovered a mass grave, containing around 70 bodies, in a former rebel bastion near Damascus.

The bodies were found in the Eastern Ghouta region who the army said were “civilians and security personnel who were executed by terrorist groups”, Syrian state media said on Monday.

The densely populated semi-urban area just east of Damascus was controlled by rebel and jihadist factions for around six years until regime forces retook it in 2018 after a long and bloody siege.

The state news agency quoted a senior police officer as saying that the killings were believed to have taken place between 2012 and 2014.

The brutal siege of Eastern Ghouta ended with a devastating regime offensive that saw at least 1,700 civilians killed before a deal was struck that saw fighters and civilians evacuated to northern Syria.

Many of the victims, among them a woman, had been bound and executed with a gunshot to the head, regime officials claimed.

AFP was not immediately able to verify the information provided by the state news agency.

The Syrian intellgince have recovered a body believed to be of opposition activists Razan Zituna. The body was found among 70 others in a mass grave in al-Ub farms in eastern Ghouta. The body’s hands were tied to the back, it was an execution.

Abu Turab al-Urduni, a senior commander of HTS in eastern Ghouta, who also headed a joint investigation branch, Sharia court with Jaysh al-Islam, was directly involved in the decision to execute activist, Razan Zaituna, and her mates.

Swathes of Eastern Ghouta were completely levelled during the siege and the regime offensive, but some residents have returned despite the lack of reconstruction.

Jaish Al-Islam rule parts of Eastern Ghouta with an iron fist, leading to clashes with other rebel groups and tensions with activists.

Frequent barrel bombing, shelling and air strikes by regime forces led to thousands of deaths, including strikes on hospitals, markets and bakeries.

Hundreds were killed when the regime launched an alleged sarin gas attack on the opposition enclave in 2013.

Many mass graves have been found in Syria in recent years, mainly in areas formerly controlled by the Islamic State group.

Syrian dictator Bashar Al-Assad lost huge swathes of the country following an armed uprising after the brutal repression of peaceful protesters in 2011.

According to UN figures, the Syria war has caused the greatest refugee crisis in the world, with at least 5.5 million people fleeing the country and more than 6 million more displaced inside Syria.

According to the Syrian Observatory for Human Rights, more than 500,000 people have been killed since the start of the war in 2011.

Thousands are still missing and Human Rights Watch last week encouraged the authorities in Syria to investigate their fate.

On Sunday, Syrian regime forces made new gains in their offensive against the last major rebel bastion in the northwest, seizing villages and towns around second city Aleppo, state media and a monitor said.

Backed by Russian air strikes, government forces have kept up the assault on the Idlib region and areas of neighbouring Aleppo and Latakia provinces since December.

On Sunday, after clashes and air strikes, regime forces “were in control of all the villages and small towns around Aleppo for the first time since 2012,” the Syrian Observatory for Human Rights said.

The move enabled forces of President Bashar al-Assad to push back jihadists and allied rebels from the vicinity of Aleppo and “secure the city”, it added.

The Britain-based war monitor said around 30 villages and small towns were captured by Syrian government forces who “advanced rapidly in the north and west of Aleppo province after insurgents pulled back”.

Syrian state television confirmed the report and said army units “have liberated all the villages and small towns west of Aleppo city”.