Buses carrying Syrian who were displaced by terrorism have returned to Syria and will be taken to their towns and villages writes SANA. 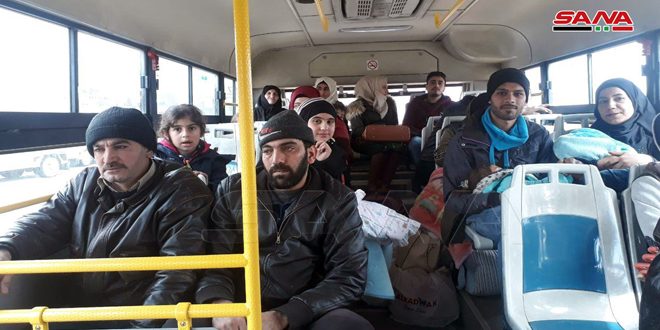 In framework of the efforts exerted by the Syrian state for the return of Syrians displaced by terrorism, new batches of displaced families on Thursday returned from Lebanon through the centers of al-Dabbousyia, Jussyia and Jdeidet Yabous in the countryside of Homs and Damascus.

SANA’s reporter in Jdeidet Yabous in Damascus countryside said that, “tens of Syrians who have been displaced due to terrorism returned from Lebanon and arrived at the center on buses, which will transport them to their homes in the villages and towns that have been liberated from terrorism.

In Homs’ western countryside, SANA’s reporter from al-Dabbousyia and Jussyia border centers reported that a number of buses carrying dozens of displaced families with their luggage arrived in the homeland Thursday.

The reporter added that after the returnees were registered, and those who were in need provided with medical services, the buses headed towards their towns and villages that have been liberated from terrorism.

In statements to SANA, some of the returnees expressed their happiness and joy to return to the homeland, thanking the Syrian Arab Army for its heroism and sacrifices, which resulted in the liberation of their villages and towns from terrorism.

They also hailed the efforts made by the authorities concerned to restore the basic services to their areas.