Opposition forces have launch an attack to retake control of the town of Saraqeb and secure the M4 and M5 highways reports Zaman Al Wasl. 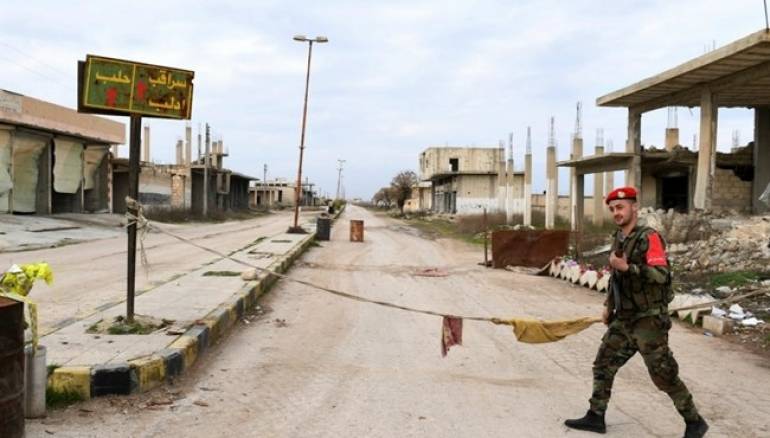 The Syrian regime captured Saraqeb on Saturday after weeks of bombardment.

Saraqeb is considered a strategic prize for the government as it seeks to regain control of the M4 and M5 highways that meet in the town.

The M5, Syria’s longest highway, connects the second city of Aleppo to the capital Damascus and continues south to the Jordanian border.

Sources told Zaman al-Wasl on Sunday that the Turkish-led National Army had mobilized 10,000 fighters to join the Turkish army in Idleb, if the regime forces refused to pull back from the newly-captured territory in the northern province.

With Saraqeb recaptured, little more than half of Idleb province remains in rebel hands, along with slivers of neighbouring Aleppo and Lattakia provinces.

Turkey’s President Tayyip Erdogan threatened on Wednesday to drive back regime troops in Idleb unless they withdraw by the end of the month to stem an assault.

Over the past week, about 1,240 Turkish vehicles carrying tanks and attack weapons entered Syria. Also about 5,000 Turkish soldiers have been deployed, including 500 elite forces.

The source said the Syrian rebels have obtained TOW missiles, canons and ammunition.

Syrian regime forces have recaptured more than 600 square kilometers of territory so far in a campaign to seize control of the last rebel strongholds of Idleb and the Aleppo countryside, a statement from Syria’s armed forces said on Sunday.

Zaman al-Wasl’s reporter said the regime forces on Sunday have taken control of 11 villages including the village of al-Eis and its strategic hill just east of the M5.

Meanwhile, Russian airstrikes on Monday killed at least five civilians in Aleppo countryside, bringing the death toll to 25 in less than 24 hours, a monitor said.

The early morning raids hit the populous village of Abyn where battles between Russia-backed regime forces and their opponents have raged for weeks, said the Syrian Observatory for Human Rights.

The victims include at least one child and a number of internally displaced Syrians, the Britain-based monitor said.

It follows a night of heavy bombardment by Russia and the regime that left at least 20 civilians dead in the neighbouring provinces of Idleb and Aleppo, according to the Observatory.

The weeks-long regime offensive has created a humanitarian crisis with about 600,000 people fleeing their homes in Syria’s last rebel stronghold since the beginning of December, according to the United Nations.