Aid workers in Idleb have called for immediate action to protect civilians and provide shelter to those who have been forced to flee their homes reports Alsouria Net. 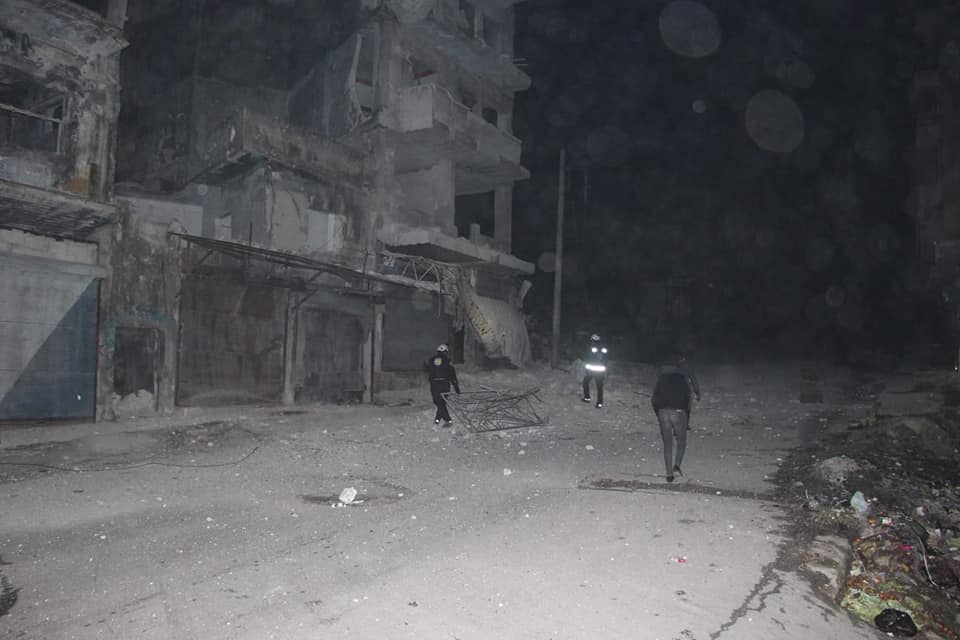 The villages and towns of the southern Idleb countryside are witnessing a “disastrous” situation as a result of being targeted by regime and Russian warplanes on Thursday, amid an increasing tempo of displacement from the area as Assad’s forces approach.

The director of the Syrian Civil Defense organization in Idleb province, Mustafa Hajj Youssef, described the situation in the southern and eastern countryside of the province as “disastrous,” adding that it was the first time Idleb had seen a situation like this.

Hajj Youssef told Alsouria Net that regime helicopters had dropped barrel bombs, striking a number of areas in the southern and southeastern Idleb countryside, including the city of Saraqeb, Sarmin, al-Nayran, and Ariha, which have seen major waves of displacement in the face of Assad’s forces approaching. He added that a “disastrous” situation was facing displaced people in light of the cold and the impossibility of obtaining homes or tents to shelter them.

The director of the Idleb Media Center, Obaida al-Fadel, told Alsouria Net that the escalation and the bombardment in Nayrab, Saraqeb and Sarmin southeast of Idleb, as well as the regime airplanes dropping explosive containers and mortars on Saraqeb, had led to massive amounts of destruction to infrastructure.

According to the Idleb Media Center and the Civil Defense, Russian warplanes carried out a massacre in Ariha in southern Idleb by striking the Ariha surgical hospital, which killed 11 civilians and put the hospital out of service.

The Russian Defense Ministry on Thursday denied that its warplanes struck a hospital or bakery in Idleb province in northwestern Syria.

Regarding the displacement, Fadel said that some families in Nayrab and Sarmin were still trapped under the bombardment because of the lack of shelter, while the Saraqeb area had been evacuated of residents, as 60 families who had been trapped were evacuated with the efforts of the Civil Defense teams and local volunteers.

The Humanitarian Response Coordinators group on Wednesday called on all aid groups and civil actors operating in Idleb province to head immediately to Saraqeb in order to evacuate civilians trapped in the area because of Assad’s forces’ advance, and the their inability to flee because of their poor material situation.

The warnings came in light of the Assad forces’ advancing with Russian support on the southern and southeastern Idleb countryside, taking control of the city of Maarat al-Nu’man and 28 towns and villages around it, according to the Assad regime General Command of the Army and Armed Forces.