Husam Eddin Ala has said called on the International Red Cross Committee to fulfil their commitments and for the international response to humanitarian situations not to be politicized writes The Syria Times. 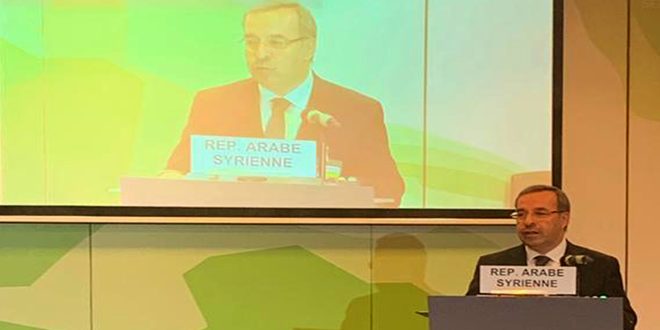 Syria has warned of the danger of the illegal activities being conducted on its soil by some members of the International Federation of the Red Cross and Red Crescent Societies (IFRC), calling for these societies to stop their illegal practices.

Husam Eddin Ala, Syria’s Permanent Representative to the United Nations Office in Geneva, said in Syria’s statement at the 33rd International Conference of the Red Cross and Red Crescent in Geneva on Wednesday, that the Syrian state, despite huge challenges represented by the fight against terrorism and confronting aggression, foreign interference as well as the foreign occupation of parts of its land, keeps cooperating and having dialogue with the International Red Cross Committee and the IFRC in order to meet the requirements of the people affected by the crisis in all Syrian areas without discrimination.

He said that the Israeli occupation authorities prevent the national Syrian and Palestinian societies from doing their humanitarian work in the occupied Palestinian territories and occupied Syrian Golan.

He regretted that the international response to humanitarian situations in Syria continue to be held hostage to political approaches, double standards and politicized international investigation mechanisms that lack political and legal legitimacy and that serve certain political agendas.

Ala pointed out that the increase of foreign support for terrorist organizations that enabled terrorists to control whole cities, destroy infrastructure and use civilians as human shields also formed unprecedented challenges in terms of dealing with the resulting humanitarian suffering.

He stressed that the countries that support terrorist organizations in Syria should comply with the rules of combat activities pursuant to Security Council resolutions on fighting terrorism.

He pointed out that humanitarian response to crises should not be politicized or subjected to any political conditions, rather it should contain sustainable solutions to the economic and social repercussions of these crises in order to assist the victims of wars.