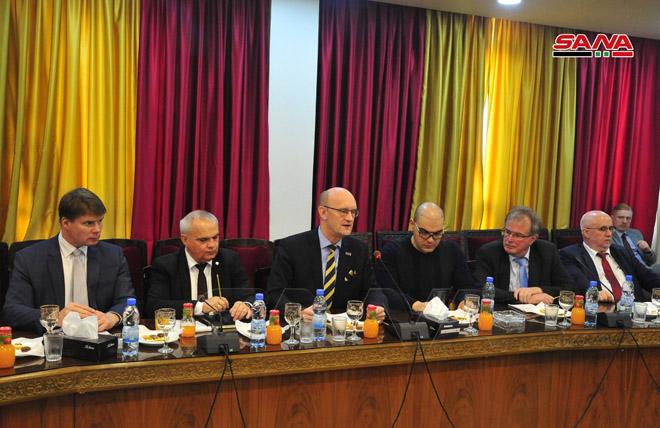 On Wednesday, the Arab and Foreign Affairs Committee at the People’s Assembly discussed with a German parliamentary delegation means to overcome existing obstacles and bolster cooperation between Syria and Germany through parliamentary work.

During the meeting, the two sides agreed on establishing a joint working paper and continuous communication by forming parliamentary work groups to take practical steps regarding the lifting of unilateral coercive measures on Syria, facilitating the return of Syrian refugees, and enhancing the relations between the two countries.

The deputy of the Arab and Foreign Affairs Committee at the People’s Assembly, Ammar al-Assad, underlined the importance of conveying the reality of situation in Syria via the German delegation to the German parliament and the German public in particular and the Europe in general, to correct the misleading image circulated by Western media outlets about what is going on in Syria.

For his part, head of the German delegation, MP Frank Pasemann, said that his party is ready to cooperate with the People’s Assembly and the Syrian government in order to reach a joint work formula and take practical steps, pointing to a memorandum submitted to the German parliament before coming to Syria, including lifting coercive measures on Syria, restoring diplomatic relations between Germany and Syria, and organizing the return of the Syrian refugees from Germany so that they can contribute to the reconstruction and development of their country.