Fires that raged across Lattakia, Homs and Tartous provinces have been brought under control and extinguished by firefighters reports SANA. 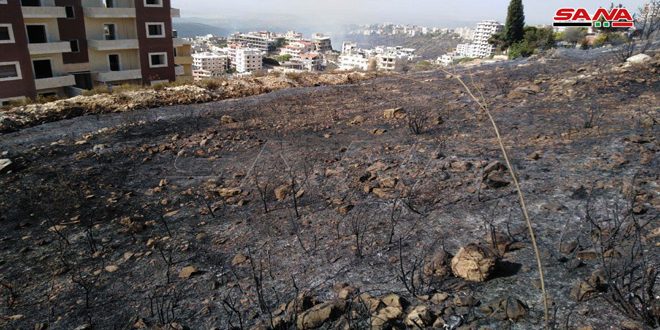 Over the past two days, huge efforts have been exerted by the concerned bodies to extinguish the fires that have erupted in the bushes in Lattakia, Homs and Tartous provinces. Most fires were controlled, while work is underway to extinguish the remaining fires.

In Lattakia, the head of Agriculture and Agrarian Reform Department, Munzer Kher Beik, said that most of the fires in the countryside of the province have been controlled thanks to the efforts exerted by the firefighting brigades in the provinces and the brigades that came to help from other provinces.

Beik told SANA that efforts are now being concentrated on encircling the fires that erupted on Sunday in the forests within the villages of Masis, Frizla, al-Shwaikha and Anabib in Qirdaha countryside.

In Homs, firefighting brigades have been able to extinguish 90 percent of the fires that have erupted over the past two days in a number of villages in al-Nadara valley, west of Homs province.

The head of Homs Firefighting Brigades, Colonel Othman Jawda, said in a similar statement that most of the fires erupted in the forests and on agricultural lands.

He indicated that the province’s fire engines and the Civil Defense and the Agriculture Directorate, in addition to fire engines from other provinces, have participated in the operations to extinguish the fires.

Jawda referred to the huge efforts exerted by all the bodies concerned for reaching the areas where fire erupted and extinguishing it despite of the ruggedness of terrain, adding that the damages were only material.

The Director Homs Electricity Company, Musleh al-Hassan, for his part, indicated that the total value of the damages was as high as 14 million Syrian pounds.

Hassan said that electricity has been restored to the mineral water wells that supply water for a number of villages, adding that work is underway to restore electricity to the rest of villages.

In Tartous, the head of Tartous Fire Brigades, Colonel Samir Shamma, said in a statement to SANA that all the fires that erupted in the province on Monday have been extinguished and there were as many as 49 fires.

Shamma added that there is still a fire in Baq’aou forests in the countryside of the province and the firefighting teams are working to extinguish it.

He indicated that two fires on Tuesday erupted in the countryside of Banias and in Safita and that the Civil Defense teams and the firefighting brigades immediately started to work to extinguish them.