Regime forces instigated a campaign of arrests after ant-regime slogans were found on a wall in the town of Zabadani reports Brocar Press. 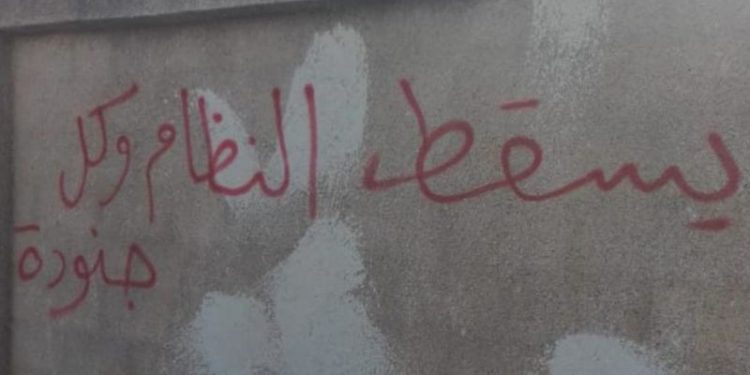 A source from Zabadani in the western Damascus countryside on Wednesday said that the Syrian regime had arrested young men from the city, for writing anti-regime slogans on the walls.

The source told Brocar Press that about ten days ago, regime forces had found writings on walls in the city and had threatened to demolish the buildings that bore the offending messages, if it happened again. The incident was repeated the next day with new writings reaffirming the previous writings.

The source continued: “Regime forces brought trucks to demolish the walls. When they were doing that, masked men came on motorcycles and shot at the machinery with weapons of unknown make, and then disappeared. After that, regime forces carried out a campaign of arbitrary arrests.”

The source noted that regime forces had released the young men after about a week, adding that the arrest campaign was supposed to terrify the residents in the city and to show them what their fate would be if they tried to mobilize against the regime.

The source said that they had no exact information about the number of young men who were arrested. Local opposition media said that number was as high as 30.

Syrian regime forces imposed control over the city of Zabadani in April 2017 after an agreement with opposition groups, with those who rejected the settlement leaving for northern Syria.

Similar events have been witnessed in areas cleared out by the regime.