Members of parliament have attack the government for failing to properly handle the economic situation in the country and failing to address the poor living conditions of citizens reports Al-Watan. 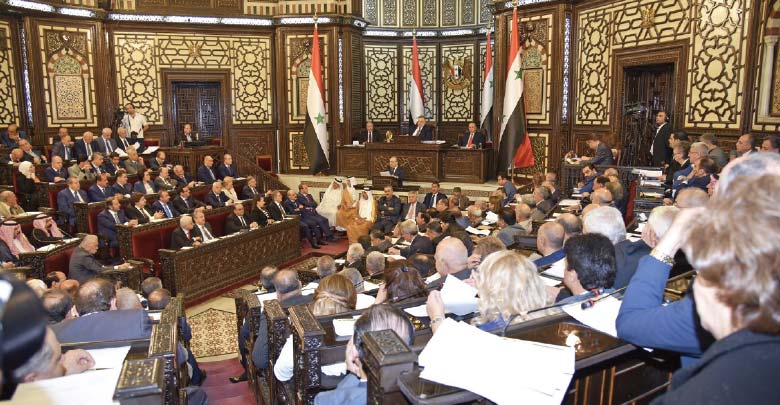 Many members of parliament directed fierce criticism at the government, with some of them expressing a lack of satisfaction with the government’s performance—especially with regards to the exchange rate of the Syrian pound. Some also described the statement by Prime Minister Imad Khamis after the opening of the session as unsuccessful and repetitive of other sessions. Others believed that the government had failed in this crisis.

The head of the parliament, Hammouda Sabbagh, opened the normal session, which lasted for eight hours, by saying: “We pledge ourselves to work to catch up to the outstanding performance of our heroic army.

The MP Bassim al-Naeema levied fierce criticism at the government team, saying that the prime minister’s statement that followed was unsuccessful and did not touch on the poor living conditions of citizens. He said that economic confusion was the reason for the lack of stability in the exchange rate.

His colleague Mohamed Serioul called for the cancelation of subsidies for mazot and health and instead give every citizen a card with an amount on it instead of the subsidies, and a health insurance card, because this would slow the erosion of the state budget.

Akkam said that the tax situation in the country was dire in terms of tax stability and there being no amendments in the law.

Prime Minister Khamis said that there was an investigation underway today of major corruption cases and that the next few weeks would lead to people being held to account, adding that no one was above the law because the prestige of the state was most important.

During his response to MPs, Khamis said that it was impossible to deny that there was corruption, but that it was a mistake to mark all institutions with that. He said that there would be an increase in salaries, but that this would come after production priorities are completed and the economy is restored to its normal growth. He said that the salaries came within the framework of a real productive structure that has safety valves, and therefore was a focus for the government team.