During the meeting with the new UNDP Resident Representative in Syria, Faisal Mikdad, has said that the work of the UNDP must not be politicized reports The Syria Times. 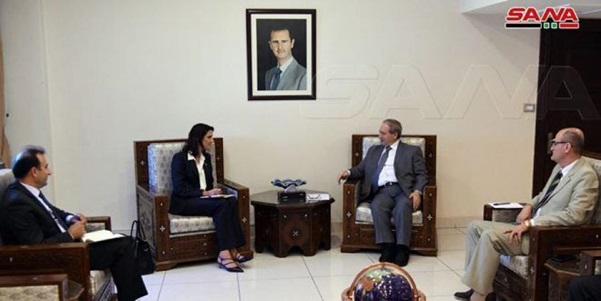 During a meeting at the Ministry of Foreign and Expatriates, Khalidi presented her credentials to Mikdad, who affirmed the importance of a productive cooperation between the Syrian government and UNDP.

Mikdad confirmed that the UNDP has to focus on development issues and achieving sustainable development in Syria, especially after the victories achieved in the war against terrorism and the regaining of stability and security in most of Syria, a step that would push the real development to strengthen the rebuilding process in the country.

He stressed the importance of UNDP taking into account the principles of professionalism, neutrality, independence and preventing the work from politicization.

Khalidi expressed her appreciation to the Syrian government for accepting her credentials as the new UNDP Representative in Syria.

Khalidi said that the UNDP will continue cooperation with the Syrian government to enhance the development process in Syria and she would seek to intensify the efforts of UNDP to meet the needs of the Syrian people.