In an attempt to speed up the capturing of towns and villages in Idleb, Hezbollah has entered the battlefield, although progress has yet to improve reports Al-Modon. 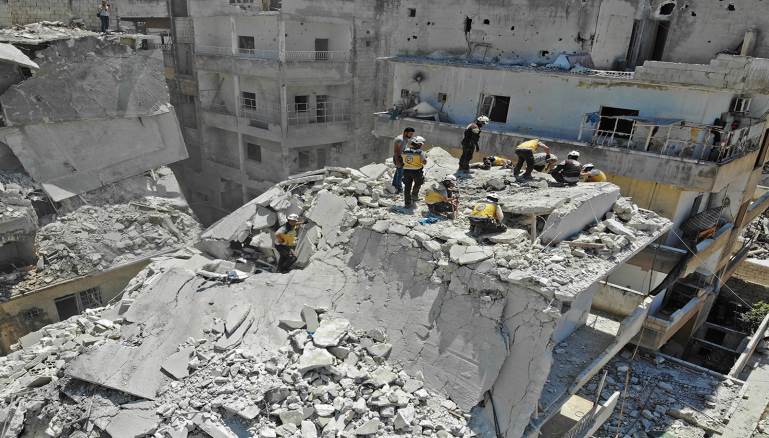 Russian warplanes and regime helicopters continued their bombardment of the southern Idleb countryside and northern Hama countryside after rebel groups were able to repel a new attempt by militias—including the Lebanese group Hezbollah for the first time—according to Al-Modon’s correspondent Mahmoud al-Shimali.

Russian warplanes used airstrikes to hit the town of Kafar Sijnah south of Idleb, as well as the areas of Terai, al-Tamanah, Kafr Zeita and al-Ltmaneh. Helicopters and warplanes have attacked the towns of Sheikh Mustafa, Maarat Hermeh, al-Zakaya, Tahtaya, Khan Sheikhoun, Sheikh Damas, Kafar Ayn, Madaya and Sahyan. For the regime forces, these villages represent supply lines and command and control centers for opposition forces, and they are trying to strike with continuous bombardments.

The anti-tank company in Hay’at Tahrir al-Sham was able to destroy a military bulldozer that had been working to raise dirt barricades on the al-Habbit front, by using anti-armor rockets equipped with night vision. After taking control of the village of al-Habbit, Russia and regime militias have been working to fortify and bolster their positions in the town. Opposition forces have monitored the militias’ movements in the area and are dealing with any observation from their points in the Kafar Ayn, Horsh Abdin and Tel Aas areas that overlook the town.

Opposition forces announced that they were able to repel an attempt to advance by regime militias backed by groups from Hezbollah on the front of Terai hill and town to the west of the town of Sakik and its hills after more than five hours of continuous clashes. Militias are trying to take control over all the hills in the area, which will help them advance to the city of Khan Sheikhoun from the east.

These clashes have resulted in the deaths of more than 25 members of regime and Hezbollah militias after the National Front for Liberation destroyed a vehicle transporting Hezbollah fighters as well as a T-72 tank and a vehicle loaded with ammunition by using TOW anti-armor rockets, which have frequently begun to appear in the hands of rebel fighters.

The National Front for Liberation broadcast a video clip showing it striking a grouping of regime militias with anti-armor rockets, which killed more than 13 fighters. A military source in the Front told Al-Modon that the TOW rockets had a major role in repelling the attempts to advance, given the speed in setting up the launchers and mobilizing them, while they were difficult to observe by reconnaissance aircraft because of the nature of the area.

Hezbollah’s participation in the fighting has been in groups, not with full military weight. Al-Modon’s source said that the participation of these groups was clear evidence of the numerical attrition of regime forces, which have been trying to advance whatever the conditions, under direct Russian orders, which has pushed them to try by day and night in an attempt to advance east to the town of al-Habbit at a depth of 25km to besiege the northern Hama countryside.

For their part, rebel groups have struck areas where regime forces are stationed in the towns of Sakik and Atshan and on the front where militias are advancing in the southeastern Idleb countryside, while al-Habbit and al-Sheikh Hadeed have been struck and regime positions in the northern Hama countryside have been struck, as well as the areas of al-Aziziyeh and al-Raseef and al-Hakoura in the northwestern Hama countryside.

Coinciding with these military events, which are ongoing in southern Idleb and northern Hama, a Turkish convoy including high-ranking officers traveled between 11 Turkish observation points in Idleb, during a short-term visit that did not exceed 30 minutes to each place, including the point in the town of Murak which is only 10 km from the front with regime forces in the Sakik area.