The Syrian National Coalition has discussed the situation in Afrin and how they might work with everyone in the area to ensure a safe and functioning region. 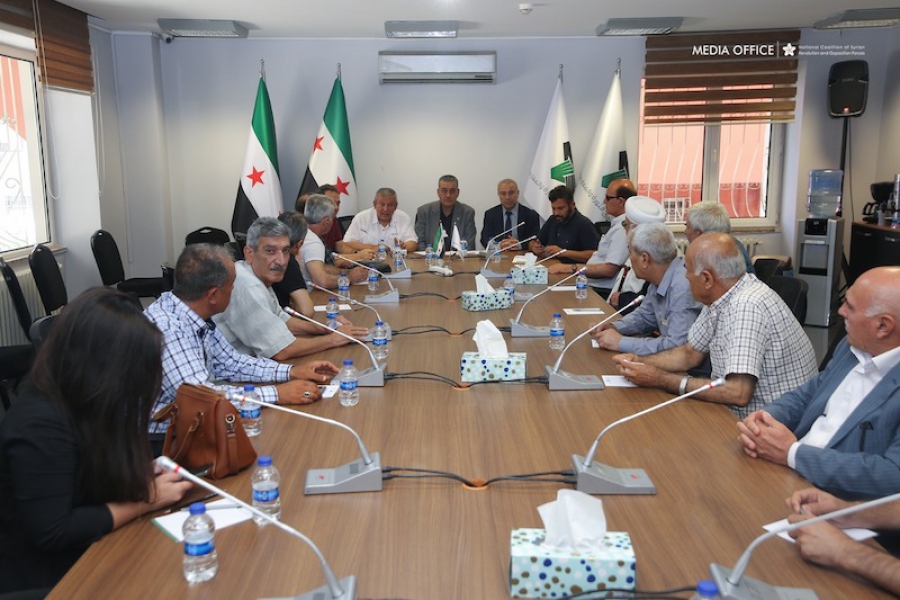 On Saturday, the Syrian National Coalition met with activists, lawyers and intellectuals from the Afrin region, who reside in Turkey, and discussed with them the latest on the ground and political developments, as well as the reality of the situation in Afrin and ways to develop the administrative and organizational work.

The meeting, which was organized by the Kurdish National Council, a component of the Coalition, was attended by Vice-president Abdul Hakim Bashar, Secretary General Abdul Basit Abdul Latif, and members of the political committee, Nazir al-Hakim and Abdullah Kaddo.

The Secretary-General conveyed the greetings of the Coalition President, Anas al-Abda, who welcomed proposals made by the people of the Afrin region. He stressed the need for more meetings and their continuity, stressing that the principle of partnership, communication and cooperation can overcome the obstacles.

Vice-President Abdul Hakim Bashar said that the Syrian Kurds must be aware of tricks by the PYD militia and prevent it from exploiting the violations to serve its own goals. “We have to be aware of the fact that we cannot change the geography. The Kurds should try to have the best relations with neighboring countries, especially with Turkey as well as with all components of Syrian society.

Bashar added that since the beginning of the Syrian revolution, the PYD militia has sought to distance the Kurds from the revolution and urged them not to participate. “The militia also avidly sought to drive a wedge between Arabs and Kurds and other components of Syrian society as well as to distract the Kurds from the demand to topple the regime through the creation of enmity, which is not in our interests either with the Syrians or with neighboring countries.”

Moreover, Bashar pointed to the need to identify the reality of the situation in the region of Afrin and cooperate with the Coalition’s institutions and not allow any political party to work for foreign agendas and goals. He also called on the people of the region to submit written proposals for the Coalition to consider and seek to address.

The people of the Afrin region underscored the need to fight corruption in the region, noting that the negative behavior of some elements in the region damaged the image of the revolution.

Both sides also discussed the security situation and how to control the issuing of weapons by the official bodies in the Ministry of Defense. They also discussed the activation of the unions in Afrin, especially the Bar Association and the Engineers Syndicate as well as all institutions of the Syrian Interim Government throughout the Afrin region