The closure of offices in Afrin that dealt with displaced people has caused protests, with many claiming that it will prevent them from returning to their homes writes Al-Modon. 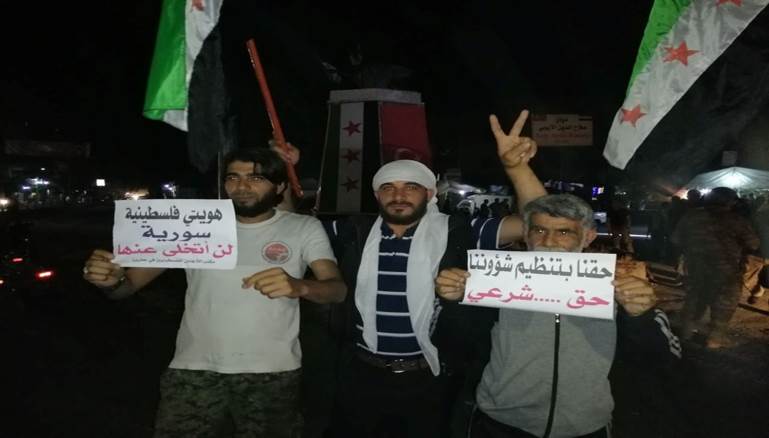 Hundreds of Syrian people, displaced to the northern city of Afrin, have protested against a decision by the Afrin local council to dissolve the offices for the displaced in the city and to stop civil registrations and to shift the task to mukhtars on behalf of the offices, according to Al-Modon’s correspondent, Mohamed Ayyoub.

The protest erupted in central Afrin, and was protected by Afrin police forces. The head of the police in Afrin, Colonel Rami Talas, addressed the protesters, asking them to disperse and promised to hold a consultative meeting soon attended by representatives of the displaced people and the local city council, to discuss their demands and to “reach a satisfactory agreement.”

The protesters carried signs calling on the local council to change its decision and warning against the: “beginning of the obliteration of the unique identity of the displaced and saying that the displaced offices were their only form of representation.

The local council in Afrin made the decision to close the offices in mid-May. On Sunday, the council issued a decision to appoint seven mukhtars to city districts, and the remaining district councils in Afrin issued similar decisions. The new mukhtars took on the task of issuing identification certificates and the residence documents necessary for the issuing of new identifications. The new identifications issued to Afrin residents include new national numbers and new registration numbers.

A member of the Free Homs Governorate Council, Mustafa al-Hussein, told Al-Modon: “It’s not logical for the mukhtar, who is from Afrin city, to issue family information to a displaced person from Homs, for example, or to approve a new mechanism for a local administration system in Afrin whereby all the city’s communities are overseen and included in the general city administration—especially for personal status issues.”

Hussein said that most current Afrin residents, who were displaced from other Syrian areas, were sticking to their right to return to their areas in the future and were rejecting any measure by local administrations that would harm this right—especially changing the registries used by the local councils on the identification documents they issue.