Andrew J. Tabler, the National Security Council's new Director for Syria, has previously worked as a journalist, editor, and analyst. 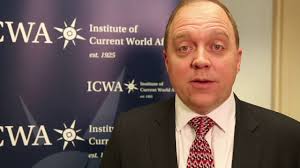 “We are always honored when our experts are called on to serve in senior policymaking positions in the US government,” said Washington Institute Executive Director Robert Satloff. “Andrew Tabler joins the NSC at a critical time in the evolution of US policy in Syria. With his extensive experience and deep expertise, we are confident Andrew will make a substantial contribution to this effort.”

Tabler has researched Syria and US policy in the Levant for the Washington Institute since 2009, originally as a Soref Fellow. He had spent 14 years in Syria and the broader region as a journalist, editor, and analyst, cultivating unique access to the most influential figures in the Middle East. In the course of his work, Tabler has interviewed Syrian First Lady Asma al-Assad, the late Israeli President Shimon Peres, the late Palestinian President Yasser Arafat, slain Lebanese Prime Minister Rafiq Hariri, and former Lebanese prime ministers Fouad Siniora and Saad Hariri.

In the past decade at the Washington Institute, Tabler has established himself as one of the most insightful experts on Syria and the Assad regime, after the uprising against Assad’s rule in 2011. His articles and opinion pieces on Middle East affairs and US foreign policy have appeared in The  New York Times, The New York Times Magazine, Newsweek,  Foreign Policy, The Atlantic, and Foreign Affairs. He has also appeared in interviews with CNN, NBC, CBS, PBS, NPR, and the BBC. He is the author of the 2011 book, In the Lion’s Den: An Eyewitness Account of Washington’s Battle with Syria (Lawrence Hill Books).

In Tabler’s new capacity as Director for Syria at the National Security Council, he will play a critical role in crafting and implementing a cohesive US policy in Syria, as well as helping to coordinate interagency efforts to advance US interests that include ensuring the long-term territorial defeat of the Islamic State; negotiating a diplomatic solution to the conflict in Syria, currently in its eighth year; and preventing Iran from gaining a military foothold in Syria.

Andrew J. Tabler holds a master’s of arts in comparative politics from the American University of Cairo, as well as a bachelor’s of arts from Washington and Jefferson College. He is fluent in Arabic.