Despite the long queue building up outside gas stations, the regime is continuing to downplay the effect that gas crisis is having on people reports Al-Modon. 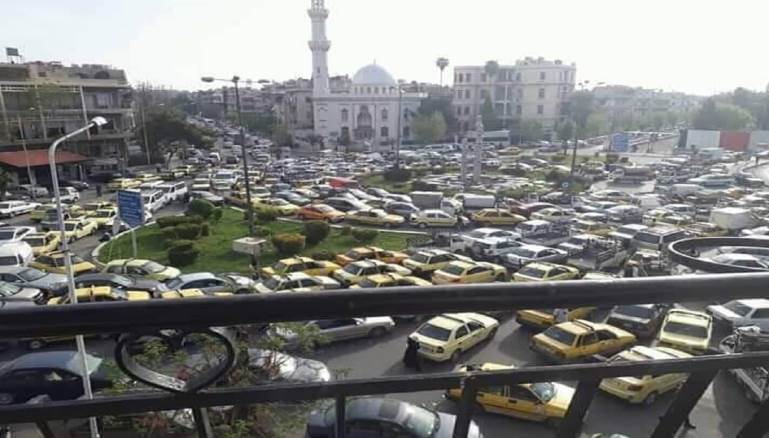 As Syrians complain on social media about the stifling gasoline crisis in regime-controlled areas, official media is denying, concealing and downplaying the difficult living situation and putting it in the context of the steadfastness required of the Syrian people in support of the Syrian state.

As images of queueing cars and people lined up for long hours to get gasoline from fuel stations, the official Syrian al-Ikhbariya channel broadcast a report from one of these lines, showing people’s “happiness” and how they spent their time enjoyably. In the program it discussed how this problem had been made positive by people meeting together, getting to know each other, and even making new friendships.

The channel’s report began with a popular song whose lyrics are: “Nothing deserves worry, nothing lasts; tomorrow things will change.” Official media meanwhile is asking people to be patient and to challenge the sanctions by playing cards and enjoying food inside their car, and has used the phrase, “We’ve seen worse days,” to downplay the importance of the current crisis, since the Syria state withstood the “terrorism” and would not be broken now by a gas crisis.

This attempt to distort serious issues by making jokes and telling stories about funny situations is a classic style used by regimes in their propaganda for decades, to reduce popular anger towards any provocative decision or event—especially when the regime is unable to offer practical solutions that can be discussed in the media at the same time as not being able to speak honestly about the crisis because that would depict the truth of a regime with no sovereignty, legitimacy, or ability to provide basic necessities to its people.

This is noticeable in another clip, where official media show dancing and dabke (a popular dance) in queues, presenting this as a way the Syrian people “spontaneously” confronted the crisis and rejected international sanctions. The report then turned to the “economic war” as a new method used by the West to pressure the people.

Official channels also showed clips of flowers being distributed to people by volunteers to express popular love, saying it was a message to US President Donald Trump that Syrians are united and don’t care about the sanctions. Other reports showed other volunteers, apparently more “elite,” offering books so that people waiting in line can spend their time on something useful.

At the start of the week, the Syrian Oil Ministry had once again reduced the amount of gasoline allotted to private cars, limiting them to 20 liters every five days, in a new austerity measure. Crowds overwhelmed stations in Syria as Damascus saw long lines of cars waiting for fuel. For months the city has suffered from a severe shortage of oil products, recently extending into gasoline, paralyzing people’s movements