As well as celebrating the departure of the French occupation forces, Syrians also repeated their calls for the Syrian Golan to be returned to Syrian sovereignty reports SANA. 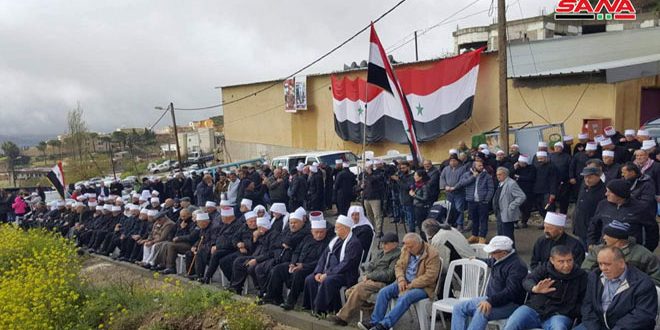 On Wednesday, a public gathering was held in the town of Ayn al-Tineh in Quneitra province to mark the 73rd anniversary of Evacuation Day and to affirm the Golan’s Syrian identity.

Assistant Secretary General of the Baath Arab Socialist Party, Hilal al-Hilal, affirmed that the struggle will continue till the occupied Syrian Golan is liberated, adding that today’s celebration on the outskirts of the Golan confirms its Syrian and Arab identity, and Syria’s determination not to give up any part of it and to restore what has been lost by all available means.

Meanwhile, a similar gathering was held in the town of Majdal Chams in the occupied Syrian Golan opposite to Ayn al-Tineh to commemorate the evacuation of the French occupation.

Sheikh Jad al-Karim Naser underlined the adherence of the locals of Golan to their motherland, Syria, expressing confidence in the inevitability of the complete liberation of the Golan and its return to Syria’s sovereignty.

A number of the participants pointed to the great meaning that Evacuation Day holds, which is embodied in the Syrian Arab Army’s heroism and sacrifices, Syrian people’s steadfastness against terrorism and the economic siege imposed by colonial countries.

They stressed that the largest evacuation will be achieved by liberating the occupied Syrian Golan, and its return to the motherland, Syria.