Members of Russia’s Fifth Corps have attacked regime checkpoints and accused those in charge of them of treating local residents badly and imposing unfair tolls writes Human Voice. 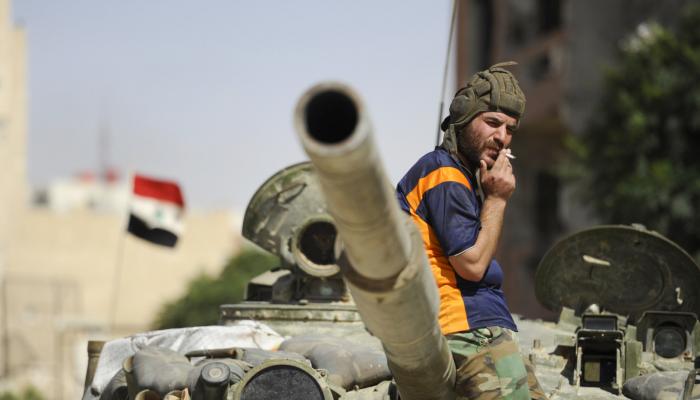 On Saturday, members of Russia’s Fifth Corps attacked a State Security military checkpoint in the town of Sur, in the Lajat region of the eastern Daraa countryside.

According to a source quoted by the Aleppo Today channel, Corps members, under the command of Ahmed al-Awda, beat and rebuked State Security checkpoint members including the officer in charge.

The source said that the attack occurred in front of a Russian military police patrol, saying that the patrol sided with the Fifth Corps and beat the checkpoint members and also reprimanded their officer.

The source added that the reason for the attack was the continuing violations by Iran-backed regime checkpoints and militias against civilians and their poor treatment of those passing through and imposing tolls on them.

A few days ago, members of the Fifth Corps attacked checkpoints of the Air Force Intelligence and 15th Division in the towns of al-Sahwa and al-Msafira in the eastern Daraa countryside, beating fighters and the officer in charge while directly threatening the officer Abou Rawad, and giving him a deadline to remove the checkpoints from the area due to the continuous violations of these checkpoints against residents, according to the Fifth Corps members.

The Assad regime’s Air Force Intelligence center in the southern Daraa province has been targeted amid an ongoing revolutionary mobilization against the Syrian regime in the province.

The Horan Free League quoted “local sources” as saying that unknown figures attacked for the third time in a week the Air Force Intelligence station in the city of Dael in the central Daraa province.

The sources said that the clashes, with light weapons, lasted for half an hour without any information about casualties on either side.

In the city of al-Hirak in the Daraa countryside, unknown figures on Thursday set fire to an image of Bashar al-Assad, 12 hours after it was placed at the city’s station, and then its remains were removed during the day.

A Syrian regime agent known as Eyad Nimr had put the image up on Wednesday afternoon near the station in response to another image of Assad being burnt at the city entrance.

The Syrian Observatory for Human Rights has recorded a new assassination amid the escalating security breakdown in the province, with unknown gunmen assassinating on Mar. 22, 2019, with machine guns a former rebel group fighter from the town of Tel Shihab in the Daraa countryside, who had recently joined the Fourth Division after agreeing to a reconciliation settlement with the regime forces, who took control of the area.

Groups calling themselves the Popular Resistance in Daraa province have called on young men to join their ranks and resist the Assad regime, which has broken vows and violated the “settlement and reconciliation” agreements and forcibly conscripted young men to serve in its ranks.

The popular resistance said in a statement issued on its Facebook page recently that it would be “the shield that defends Syrians in all their forms, wherever they are,” and called on young men of Houran to join them.

According to the Popular Resistance statement, this comes as a result of, “where matters in the south have led, in terms of the Assad regime breaking promises and carrying out arrests and forcing young men into compulsory and reserve service, and forcing defectors back to service in their ranks, taking advantage of the harshness of the life and the difficult conditions people are living.”

The Popular Resistance addressed its statement to young men across Syrian territory, calling for them to join their ranks to, “drive away oppression from the oppressed and to continue on the path to freedom for which blood and bodies were spent.”

The Popular Resistance was formed by a group of young men from Houran in mid-November after the Assad regime’s forces took control over the entire provinces of Daraa and Quneitra with Russian and Iranian backing, in a fierce military campaign that led to the “displacement and settlement” agreements in the province.