The Litani river flooded many of the fields stretching across the two majestic mountain ranges flanking the Bekaa after this year's second major storm hit on Wednesday reports Arab News. 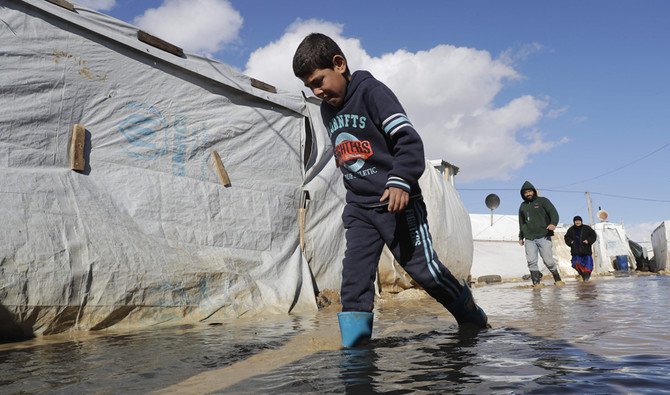 Snowstorms and weeks of bad weather have turned Lebanon’s lush Bekaa Valley into an unliveable swamp for tens of thousands of Syrian refugees.

The Litani river flooded many of the fields stretching across the two majestic mountain ranges flanking the Bekaa after this year’s second major storm hit on Wednesday.

Some families had barely finished repairing their tents when the most severe winter they have faced yet unleashed another crushing night of snow, wind and flooding.

“We spent all night emptying the tent but the water kept coming in,” said Thaer Ibrahim Mohammed, a red and white headscarf wrapped around his head.

“This is the worst winter,” said the greying man.

Gaggles of children made the most of the afternoon sun and pulled rubber boots on their bare feet to romp in the camp’s sludgy alleys and have snowball fights.

The shelters in “Camp 040”, which lies on the edge of the village of Delhamiyeh and is one of the many informal settlements that dot the valley, are all the same.

Thousands of refugees in informal settlements across Lebanon are at risk of extreme weather as Storm Miriam hit the country.

They were erected on concrete slabs and their roofs are held down with used tyres.

Their tarpaulin walls provide a flimsy protection against strong winds and freezing temperatures.

The camp looks like it could have sprung up just weeks earlier but many of its residents have lived there since 2012, when the Syrian conflict escalated.

Abu Ahmad, a native of Homs spending his seventh winter in Lebanon, said aid was inadequate.

“This year there was a lot of rain. But humanitarian organisations have reduced aid,” he said, standing on a brick placed as a stepping stone in a muddy puddle.

“You just need to look: do you think this sheeting keeps us warm or keeps the water out? They gave us nothing, no new tarps, no firewood, nothing,” the young man said.

Aid organisations say they are doing their best to distribute emergency aid to the most vulnerable among the estimated 340,000 refugees living in the Bekaa valley.

Some tents were destroyed by the storms that elsewhere in Lebanon have cut the main road to Syria several times, flooded the highway north of Beirut and forced schools to close.

Relief agencies have had to relocate families who were left homeless, once again, in several feet of snow.

Fatima, a 20-year-old refugee originally from the main northern Syrian city of Aleppo, had to leave her tent with her family but opted to squeeze in with neighbours.

“The tent is totally flooded, we can’t live in it. So we took our things and left, what else can we do?”