At a speech at the American University of Cairo, the Secretary of State spoke about the fight against radical Islam and the struggle to expel Iran from Syria writes The US State Department. 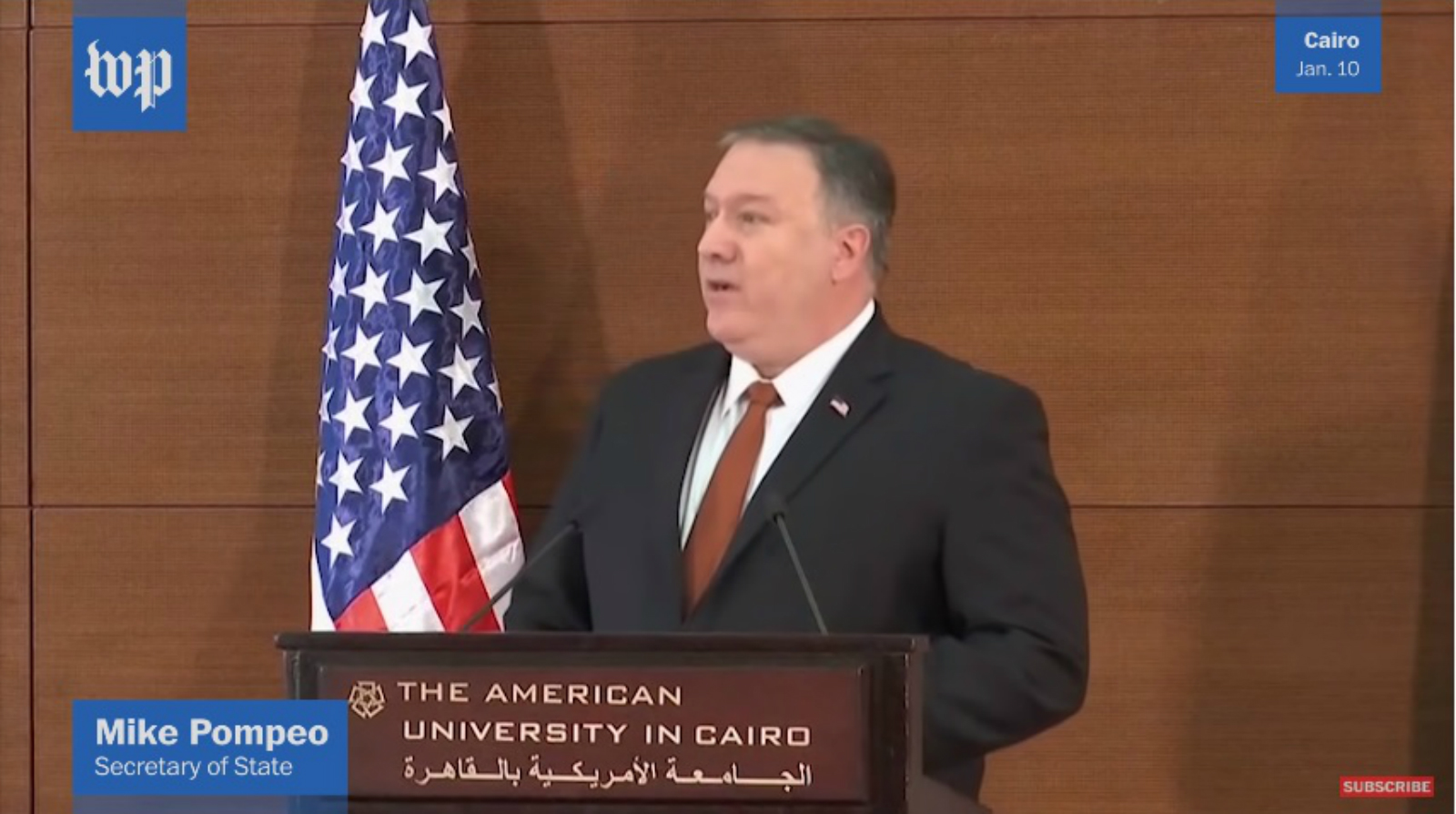 We grossly underestimated the tenacity and viciousness of radical Islamism, a debauched strain of the faith that seeks to upend every other form of worship or governance.  ISIS drove to the outskirts of Baghdad as America hesitated.  They raped and pillaged and murdered tens of thousands of innocents.  They birthed a caliphate across Syria and Iraq and launched terror attacks that killed all across continents.

America’s reluctance, our reluctance, to wield our influence kept us silent as the people of Iran rose up against the mullahs in Tehran in the Green Revolution.  The ayatollahs and their henchmen murdered, jailed, and intimidated freedom-loving Iranians, and they wrongly blamed America for this unrest when it was their own tyranny that had fueled it.  Emboldened, the regime spread its cancerous influence to Yemen, to Iraq, to Syria, and still further into Lebanon.

Our penchant, America’s penchant, for wishful thinking led us to look the other way as Hizballah, a wholly owned subsidiary of the Iranian regime, accumulated a massive arsenal of approximately 130,000 rockets and missiles.  They stored and positioned these weapons in Lebanese towns and villages in flagrant violation of international law.  That arsenal is aimed squarely at our ally Israel.

When Bashar Assad unleashed terror upon ordinary Syrians and barrel-bombed civilians with sarin gas, a true echo of Saddam Hussein’s gassing of the Kurdish people, we condemned his actions.  But in our hesitation to wield power, we did nothing.

In that same spirit, just last year, America bolstered a coalition of allies and partners to dismantle the Islamic State’s caliphate, liberating Iraqis, Syrians, Arabs and Kurds, Muslims and Christians, men, women, and children.  President Trump empowered our commanders in the field to strike ISIS quicker and harder than ever before.  And now 99 percent of the territory ISIS once held is liberated.  Life is returning to normal for millions of Iraqis and Syrians.  Nations in the global coalition should all be enormously proud of this achievement.  Together we have saved thousands of lives.

Our allies and partners have helped greatly in the counter-ISIS effort.  France and Britain joined our strikes on Syria and have supported our anti-terror effort around the world.  Jordan and Turkey have hosted millions of Syrians fleeing violence.  Saudi Arabia and Gulf countries have generously contributed towards stabilization efforts.  We thank all of them for their help, and we urge them to continue.

The United States has also helped liberated areas as an important means of preventing the caliphate from re-emerging.  We have provided $2.5 billion in humanitarian assistance to Iraq since 2014, and our churches and non-profits do good work there every day as well.  We and our allies generated nearly 30 billion in grants and financing support to aid Iraq’s reconstruction during the Kuwait Reconstruction Conference just this past year.

Let me be clear:  America will not retreat until the terror fight is over.  We will labor tirelessly alongside you to defeat ISIS, al-Qaeda, and other jihadists that threaten our security and yours.  President Trump has made the decision to bring our troops home from Syria.  We always do and now is the time, but this isn’t a change of mission.  We remain committed to the complete dismantling of ISIS – the ISIS threat – and the ongoing fight against radical Islamism in all of its forms.  But as President Trump has said, we’re looking to our partners to do more, and in this effort we will do so going forward together.

For our part, airstrikes in the region will continue as targets arise.  We will keep working with our partners in the Coalition to Defeat ISIS.  We will continue to hunt down terrorists who seek safe havens in Libya and in Yemen.  We strongly support Egypt’s efforts to destroy ISIS in the Sinai.  We strongly support Israel’s efforts to stop Tehran from turning Syria into the next Lebanon.

In Syria, the United States will use diplomacy and work with our partners to expel every last Iranian boot, and work through the UN-led process to bring peace and stability to the long-suffering Syrian people.  There will be no U.S. reconstruction assistance for areas of Syria held by Assad until Iran and its proxy forces withdraw and until we see irreversible progress towards a political resolution.