While insisting that there will be no negotiations with the government, the SDC points out that as of yet, no US troops have left Syria reports Damas Post. 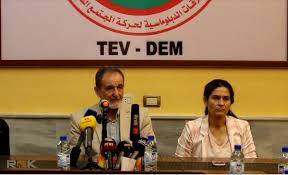 The head of the Independent Syria Party, which is part of the Syrian Democratic Council (SDC), Ibrahim al-Qaftan, said that the coordinators from the American State Department have not yet withdrawn from north and northeastern Syria, and that the American observation points in Tel Abyad have not yet been removed.

Qaftan told Damas Post, “This is not the first time that US President Donald Trump has announced the withdrawal of American forces, and the Pentagon’s behavior often contradicts these statements. It seems that these statements are the result of internal disputes in America.”

He also said, “So far, not a single American soldier has pulled out of any base in the Self-Administration areas.” He added, “We still have the ability to fight without America. There will be no acceptance of any settlement with the Turkish side, even if we remain alone in the fight.”

Qaftan said that the Turkish reinforcements in the areas north of Manbij were ongoing, and that the American points deployed south of the al-Sajour river north of the city, remain as they had been, and that no fighters had withdrawn from them.