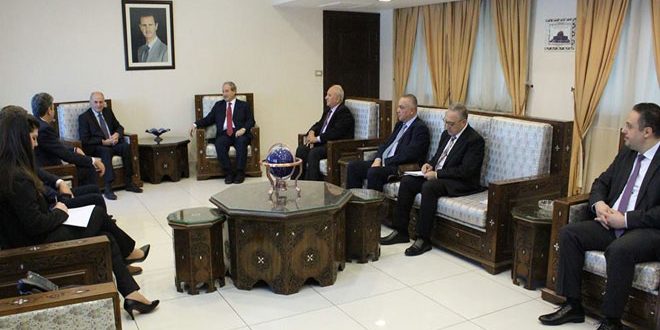 The Slovak politician said that the delegation’s visit to Syria is intended to express solidarity and appreciation for the Syrian people and government, adding that President Bashar al-Assad’s wise leadership and steadfast fight against terrorism is making history.

Mikdad, for his part, presented a thorough review of the developments in Syria and their keenness on liberating all Syrian territories from terrorism, citing the importance of national reconciliations for restoring security and stability.

He affirmed that unilateral coercive economic measures are harming the Syrian people and must be ended.

Mr. Carnogursky met with Prime Minister Imad Khamis, who underlined the necessity of cooperation between progressive parties and exchanging expertise in all fields in a way that reflects positively on the interests of their people.

Khamis indicated that Syria is on road to sealing a victory over terrorism and restoring safety to all areas, affirming that the terrorist war has failed to undermine Syria’s sovereignty and independent national decision, thanks to the Syrian people’s support for their army and leadership.