Around the world, Syrian students conducted sit-ins to protest against the economic sanctions imposed on Syria reports SANA. 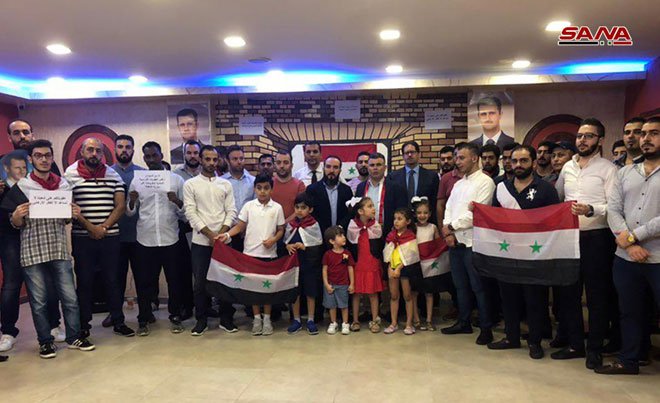 On Saturday, branches of the National Union of Syrian Students (NUSS) and Syrian communities abroad staged sit-ins in front of European missions in several world capitals, calling for the lifting of the economic blockade on Syria.

Syrian students and other members of the Syrian community in Austria, as well as members of the “Hands off Syria” initiative, rejected and condemned all forms of unjust and coercive measures imposed on Syria, in addition to the sending of terrorists to implement expansionist and aggressive policies.

Syrian students and the community in Egypt also condemned the policies of economic blockade, which subjugate people and governments that reject foreign dictates and adhere to independent national decisions.

In New Delhi, a mass of Syrian students and members of the community called on the international community to stand with Syria in their confrontation with terrorism.

During their gathering, Syrian students from the Russian universities in Moscow, in cooperation with their Russian colleagues and members of the Syrian community and Arab Baath Socialist Party, called for the ending of unjust sanctions imposed by EU states on Syria.

In the Algerian capital, Syrian students arranged a sit-in, organized in coordination with the Syrian Embassy, calling for the need to lift the blockade, sending a letter to the EU Ambassador condemning all the coercive measures burdening the Syrian people.

In Beirut, the NUSS and Syrian Workers’ Association, in cooperation with Lebanese student organizations, held a sit-in in front of the headquarters of the United Nations ESCWA to condemn the coercive measures.

In Germany, NUSS held a supportive stance, expressing in a statement directed to the European Commission the rejection of the unjust blockade imposed on Syria in coincidence with the war of terrorism.