Deputy Foreign Minister Faisal Mikdad, emphasised the work that Syria has been doing with the OPCW and called on Israel to join the Chemical Weapons Convention writes SANA. 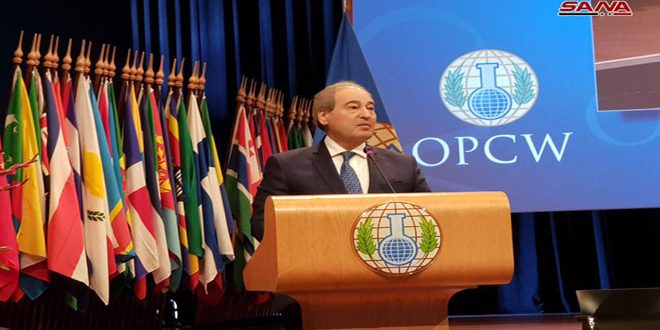 Deputy Foreign Minister Faisal Mikdad said that Syria condemns in the strongest terms any use of chemical weapons anywhere, by anyone and under any circumstances.

Delivering Syria’s speech at the Fourth Special Session of the Conference of States Parties to review the operation of the Chemical Weapons Convention (CWC) at The Hague, Mikdad said on Wednesday that since holding the Third Review Conference in 2013, important achievements had been made in elimination of the Syrian chemical weapons, with Russia, Iraq and Libya completely destroying all of their chemical weapons and their production facilities.

Mikdad said that, “Syria expresses concern over the US procrastinating about the process of destroying its chemical weapons and completing the destruction of its vast arsenal of these weapons.”

Mikdad pointed to the success achieved in the elimination of Syrian chemical weapons by transporting the chemical materials out of Syria in order to destroy them, along with the destruction of all chemical facilities under delicate and difficult circumstances, which makes the process a historic precedent.

Mikdad stressed that Syria has confronted the largest and fiercest terrorist attack on its territory, and terrorism was eradicated and safety and security were restored to the country thanks to its army, in cooperation with allies.

Mikdad said that one of the key factors that ensured the successful elimination of Syrian chemical weapons was the cooperation between the Syrian government and the technical secretariat of the Organisation for the Prohibition of Chemical Weapons (OPCW), which reviewed Syria’s initial declaration and made it fully consistent with the provisions of the Convention.

Mikdad affirmed that the theories adopted by some countries based on spreading chaos and the policies of regime change by force led to the expansion of the terrorism phenomenon around the world.

These countries, he added, did not like the state of security and stability in Syria, which led them to push their tools and mercenaries to destabilize the country by fabricating stories about the use of chemical materials against civilians aimed at distorting the image of the Syrian state.

Syria has maintained cooperation with the technical secretariat of the OPCW and managed to overcome many complexities in the Syrian file through the continuous work, systematically providing information on the terrorists’ desire to possess and transfer chemical weapons and toxic chemicals via Turkey into Syria.

The OPCW put forward several aspects that need to be addressed and developed, including respect for the national expertise of states parties in dealing with issues related to them, he added.

Mikdad welcomed “the accession of Palestine state to the Convention as the 193rd Member State of the Organization, which represents an important step towards achieving the universality of the Convention”.

Mikdad pointed out that the strengthening of regional security and peace in the Middle East requires efforts to make the region free of all weapons of mass destruction. This will not be achieved, he explained, unless Israel is obliged to accede to the Chemical Weapons Convention and other relevant international conventions on the non-proliferation of weapons of mass destruction

He clarified that the issue involving violations of confidentiality in the organization has raised serious concern in Syria and a number of countries.

Mikdad reiterated that Syria has been keen since the first day of its accession to the organization to cooperate with the technical secretariat in a positive and transparent manner to implement its obligations under the Convention and the Executive Council resolutions.