There were six Syrian teams in the competition, which included Karim al-Assad, who competed in the junior category reports SANA. 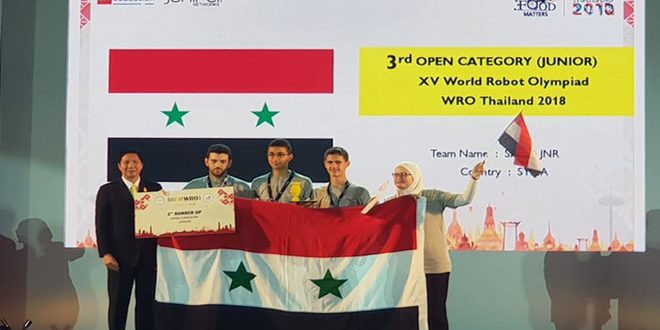 Russia placed first, followed by Romania, which came in second in the same category.

National Representative to the World Robot Olympiad, Mouhib al-Nuqari underlined the importance of such competitions in encouraging students to exploit their real capabilities, maximize their true potential and push them to excel in scientific and technical fields.

Six Syrian robotics teams are taking part in the three-day global event, which kicked off on Oct. 16, 2018.

They include the Mechanical and Electrical Engineering Faculty team from Damascus University which will compete in the College category, two teams from Sawa School and the Syrian Computer Society will participate in the Open category and three teams from the Syrian Computer Society and the National Center for Distinguished Students will take part in the regular competition.