President Assad urged everyone to remember the sacrifices of the Syrian Arab Army and to not forget those still being held by terrorist groups reports The Syria Times. 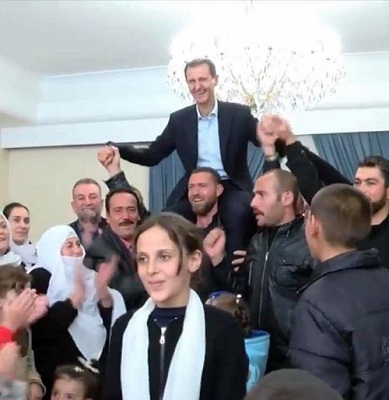 Upon the return of our family members who have been liberated by the Syrian Arab Army from the Islamic State (ISIS), President Assad said that Syrians are never to forget the missing or kidnapped people in other regions of Syria. The President went on to thank to the heroic men of the Syrian Arab Army and added that without their sacrifices, none of the kidnapped could have return, and without the army, all of Syria would have been kidnapped.

"The army has been protecting Syria, her soil, dignity and people. Everyone who was kidnapped and liberated by the blood of the heroic Syrian Arab Army; and every one who abstained from military service and the Homeland, shoulders the responsibility for every martyr lost by Syria and by his family,'' continued President Assad.

‘'Your steadfastness though all the threats surrounding you, makes you a source of pride for all Syrians. You prove that dignity and steadfastness are top among the characteristics of the Syrian people. The Syrian people have been fighting to safeguard and protect Syria, their dignity and honor, taking the steadfastness of our people in the Syrian Arab Golan as the leading example for nationalism and dignity. Those Syrians will never compromise a single grain of the soil of their homeland,'' asserted President Assad.

It was a family meeting between the Assad and a small group of his wider family members, including family members from the occupied Golan and the hero Sidqi al-Maqt, whose love for their savior, defender and liberator was beyond every description. Love, amity, fraternity, loyalty and belonging were shown and strongly represented by the breaking of the cup from which President Assad drank, a traditional symbol of immense respect and love, as well as the thundering slogans and folkloric songs and by raising President Assad on the shoulders of his citizens.