The decision to change the flag of the revolution to one that features the tawheed has sparked anger among many reports Ana Press. 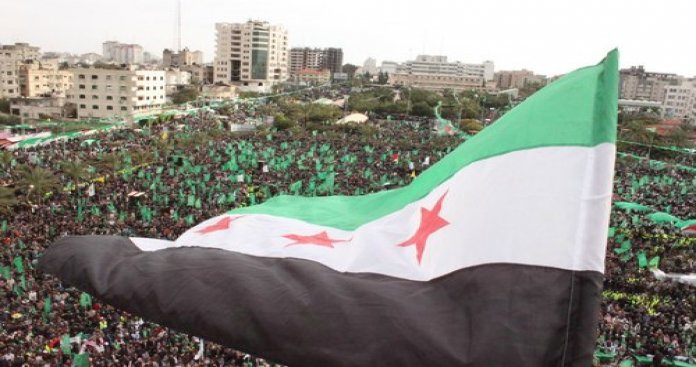 The new flag does not differ greatly in terms of the shape, but rather in the fact that it contains the expression, “There is no god but God,” rather than the three stars in the center, while retaining the colors as they were without alteration.

The decision was widely rejected by the masses of the Syrian revolution in various areas—not a rejection of the slogan itself, but a rejection of the manner in which the flag was proposed and changed without consulting what remains of the people who have made sacrifices and struggled over the years under the banner recognized and distinguished by the three stars, far from considerations and loyalties.

The General Staff of the Free National Army said in a statement: “The Syrian flag is the banner in whose shadow the free Syrian people have united from the first moment that their blessed revolution began, aiming for freedom, justice, equality, and an end to the regime of tyranny and oppression.”

The statement added that “no god but God” was an expression of belief whose place was in the hearts of true believers, and that “we do not see any need to make it into banners and cloth pieces. We do not underestimate its value, and therefore we are eager not to subject it to any abuse by the revolution’s enemies, such as burning, stomping upon, or any other violation.”

Mohamed Bassam, an activist and member of the Journalists Association, told Ana Press that over the seven years of the revolution, “our suffering people have been subjected to a number of harassments, whether from the Assad regime or the failed administrations. They have climbed onto the backs of civilians and have received sensitive positions in the revolutionary command, which have been far from the ambitions of the people who rose up. Perhaps the biggest errors committed by these climbers has been to adopt slogans far from their morals, behaviors and transgressions.”

Bassam added that with regards to the flag: “Dozens have been killed and many revolutionary factions banned on the excuse of them adopting different banners, either on charges of secularism or on charges of being subordinate to something else. Today those who are fighting under the banner of the revolution, which has been buried in the hearts of millions of supporters of the revolution, we see them running behind it and placing the tawheed slogan on it, not out of faith, but for aims we do not know. We all know their subordination and foreign orders.”

Bassam said that he was not against the tawheed slogan, but that its place was in the heart and it did not need to be on a piece of cloth raised as a banner for a number of reasons, most importantly, “Assad regime members have stomped on the revolution’s flag with three stars, and so how will they behave with a flag that has the tawheed slogan on it, in terms of insults, burning, stomping on it with their feet, or similar actions? By putting the tawheed slogan on the flag we will also lose many members of the Syrian revolution who are not Muslim, and here we are talking about the interests of all people who have risen up for seven years and struggled to reach this place, and with an ill-considered error we will lose what they have built.”