Syrian condemnation of Ukraine assassination, defiance from Faisal Mikdad, fears of a chemical attack and Turkish terrorism classification. Catch up on everything that happened over the weekend. 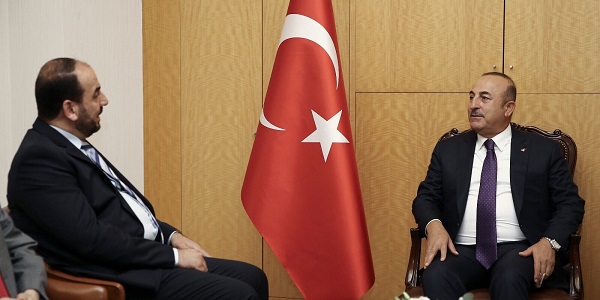 1. Syria condemned in the strongest terms the assassination of the President of Donetsk People’s Republic Alexander Zakharchenko, affirming that it was a cowardly act that poses a threat to security and stability of the area. The Foreign Ministry added that “the assassination is a clear attempt to undermine the process of a peaceful political settlement in the Donbass area and the implementation of Minsk agreements,” an official source at Foreign and Expatriates Ministry said in a statement on Saturday. [SANA]

2. Deputy Foreign Minister Dr. Faisal Mikdad stressed that the Syrian state is determined to end the presence of terrorist organizations in Idleb province. Their defeat aims to restore security and stability to the area and free the besieged civilians from the clutches of these organizations. In an interview with the Syrian TV on Friday evening, Mikdad said that the misleading reports about Idleb by the media are part of the hypocrisy mechanism adopted by the US, the Western states and their tools in the region. [SANA]

3. Syrians fear that Bashar al-Assad's regime could be planning another chemical attack, after Russian media claimed rebels were planning "false flag operations" – a tactic employed by Moscow prior to previous toxic gas massacres, and that aims to smear the opposition and deflect blame from the regime.  It started when the Russian Defense Ministry claimed on Saturday that rebels have shipped chlorine canisters into Syria to use in a chemical attack and blame civilian deaths on Bashar al-Assad's regime. [Zaman al-Wasl]

4. Turkey has designated the rebel group Hay'at Tahrir al-Sham in Syria as a terrorist organization, as the Syrian regime prepares for a large-scale military assault in Idleb where the group holds sway. In recent days, both the government and its ally Russia have stepped up their rhetoric against the rebel presence in Idleb, which is dominated by the Hay'at Tahrir al-Sham alliance formed by Al-Qaeda's former Syrian branch and al-Nusra Front. The Turkish Presidential decision published on Friday matches a decision by the United Nations in June to add Hay'at Tahrir al-Sham to a list of people and organizations whose assets are frozen due to links to the militant groups Al-Qaeda and the Islamic State. [Anadolu News Agency]

5. On Friday, Turkish Foreign Minister Mevlut Cavusoglu met with Nasr al-Hariri, President of the Syrian Negotiations Commission. The two officials exchanged views on recent developments in Syria, including Idleb and also the period ahead concerning the political process. Turkey has repeatedly warned that an operation on Idleb, which is severely overcrowded with internally displaced people, could result in a humanitarian disaster. "It is important for all of us to neutralize these radical groups," Çavuşoğlu said earlier Friday. "But we have to distinguish the civilians from the terrorist groups." [The Syrian National Coalition]