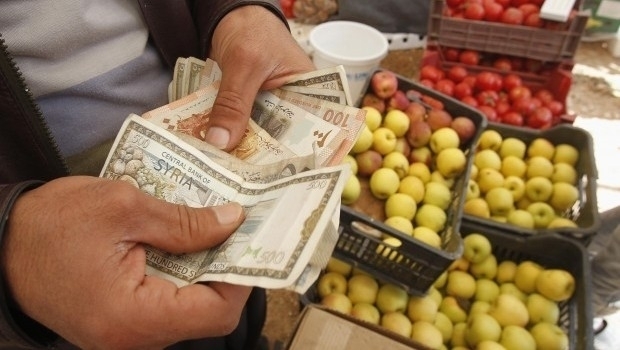 The governor of the Syrian central bank, Adib Mayaleh, yesterday held his country’s citizens responsible for the declining exchange rate of the Syrian pound—which recently reached a record low of 123 pounds to the US dollar—because they are converting their savings into foreign currencies.

Mayaleh was speaking during a television interview on a channel affiliated with the Syrian regime, as part of a special edition of the program “Hadith Al-Balad” devoted to discussing the decline of the Syrian pound against the dollar, which was broadcasted on Sunday afternoon. During the interview, Mayaleh claimed that “(stock exchange) speculation on the Syrian pound is part of the war against Syria’s currency.”

He went on to say, “After a press statement I issued on Wednesday, the exchange rate improved from 123 to 108 pounds against the dollar. However, my statement came in the final hours of Wednesday, and Thursday, Friday, and Saturday was a holiday period, during which there is traditionally little supply and demand.”

Mayaleh called upon Syrian citizens to “remain a positive influence in maintaining the value of the Syrian pound”, so as to protect the currency and so that the central bank does not have to resort to selling the US dollar. However, he noted that this would “depend on the situation.”

Mayaleh promised that the central bank will undertake “significant and positive procedures,” but he added that “these cannot be revealed until they have been consulted upon.” He remarked that the bank will have a bigger presence in the market in the coming phase.

The central bank governor concluded by saying that those gambling on the collapse of the Syrian pound, or speculating on its decline, were “holding a gun in the face of the Syrian citizens and the Syrian army. This is what will kill the economy.”