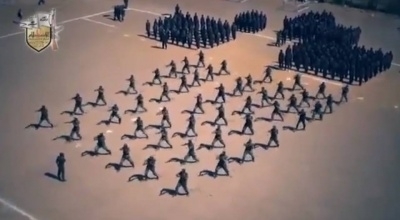 Activists have broadcast a YouTube clip showing what is described as “the powerful march” of commandos with the Islam Brigade completing military training.

The video’s commentator describes scenes as the first division in training exercises while the second division is being trained for direct confrontation with regime forces.

The trainees – mostly in their 30s – exhibit an operation in which they capture and detained regime soldiers.

The trainees repeated slogans against regime's forces while songs are played praising the revolution and the rebels.

The training course is considered evidence that there are attempts to organize the Free Syrian Army divisions and comes amid revelations that many countries are ready to arm  the Syrian opposition.

Translated and edited The Syrian Observer