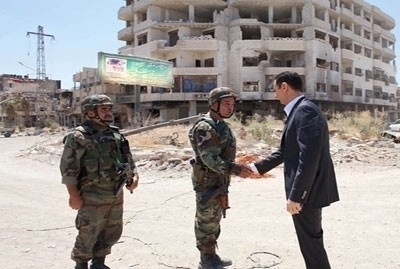 President Bashar Assad praised the army during a visit to the town of Daraya in Damascus Countryside on the occasion of the Syrian Arab Army's national day Thursday, marked on 1 August every year.

Meeting with an armed unit, Assad said that the enemy has failed to kill the pride and courage of the Syrian people, despite all its attempts and those of the forces backing it.

He said the enemy has found itself faced with an army that knows neither defeat nor fear.

Assad praised the army for "spreading fear in the terrorists' hearts and protecting the homeland."

He said that history will the current work of the Syrian Arab Army and that today the whole world is talking about their efforts.

"Your motto has always been 'Homeland. Honor. Honesty," the President said, "and here you are honestly defending the homeland and its honor."