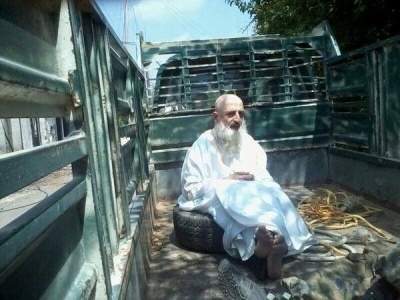 Alawite Sheikh Badr Ghazal, who was kidnapped during rebel battles to "Liberate the Syrian Coast", has appeared in a photo showing him in good health.

In the photo, the cleric is seen sitting in a wagon, wearing his white garments and without any apparent signs of ill treatment or torture.

Meanwhile government warplanes bombed a village in Syria's north overnight in an apparent attempt to prevent opposition rebels from advancing on communities in the Latakia province, Reuters reported.

Latakia is the home province of President Bashar Assad and his father and former presidnet, Hafez Assad, and a stronghold of their minority Alawite sect.

In airstrikes on the Sunni village of Salma, 20 people were killed, including 10 civilians, six Syrian fighters and four foreign fighters, according to the opposition Syrian Observatory for Human Rights.

Insurgents could be seen walking around the village, surrounded by green fields and orchards. No civilians could be seen and houses appeared to be empty, Reuters reported.