Looted goods are on sale after the fall of Khaldiyeh 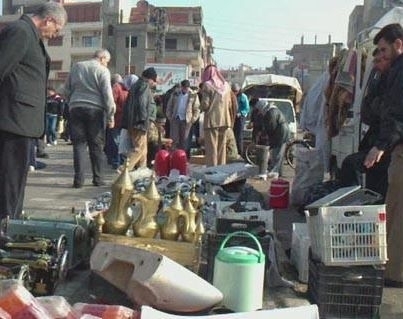 Sunni markets in Alawite neighborhoods of the city of Homs are flourishing again after the fall of Khaldiyeh in July.

Sources from al-Nuzha and al-Hadhara, both pro-Assad neighborhoods, said that huge numbers of the stolen goods from Khalidiyeh have invaded the Sunni markets.

"Even the electricity cables were stolen, everything, everything," one Zaman al-Wasl source said.

British Daily Telegraph reporter, Ruth Sherlock, mentioned the Sunni markets of Homs in a report last July, where stolen goods are taken to a loyalist Alawite districts and sold at what has become known as "the Sunni Market."

"I pretended I wanted to buy a cheap laptop. The market has everything you can imagine; from Adidas trainers to furniture," she told the Telegraph.

"They even took the doors, tiles and electric cables from the homes. The Shabbiha are organized; some loot the houses, whilst others sell the goods. They are not ashamed. One man told me it was a 'gift from the war'."

After each campaign, however, Alawite civilians and loyalist paramilitaries from the National Defence Force have stormed the newly recaptured towns and villages, looting Sunni homes and often setting them on fire, with the apparent aim of ensuring that the owners have nothing left to return to.

Other residents told the Telegraph that Alawite neighbors are now storing the stolen goods on their farms.