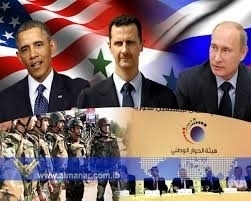 Speculation abounds about the possibility of a confidential deal between Moscow and Washington to avoid a U.S. strike on Syria.


All eyes are not only set on Monday's meeting of Congress in Washington, but also on the simultaneous meeting between Syrian Foreign Minister Walid al-Moallem his Russian counterpart Sergei Lavrov in Moscow.


There is speculation that Moallem will carry a response to a political compromise deal that includes a gradual political transition of power to end the 30-month conflict.


Sources close to the Syrian opposition said that the secret negotiations were conducted backstage at the G20 meeting in St Petersburg last week and were likely affected by the tense atmosphere at negotiations between Russian President Vladimir Putin and his U.S. counterpart, Barack Obama .


The regime, meanwhile, seeks the formation of joint committees for a ceasefire, which the opposition considers a waste of time.


The source added that the second issue raised by the U.S. is the Syrian regime's abandonment of non-conventional weapons and disposing of them with the participation of international experts, in addition to a commitment not to deliver weapons to Hezbollah.

The third issue to be negotiated is the Syrian president's announcement that he hasn’t any intention to run for the presidential elections after the end of his second term in July 2014 .


Some analysts link these speculations with the escape of  former Syrian Defense Minister Ali Habib to Istanbul. It is likely that Habib, who is well respected by Alawites and senior military officers as well as the regime and the opposition, will have an important role in the negotiations and the transitional phase.


Translated and edited by the Syrian Observer