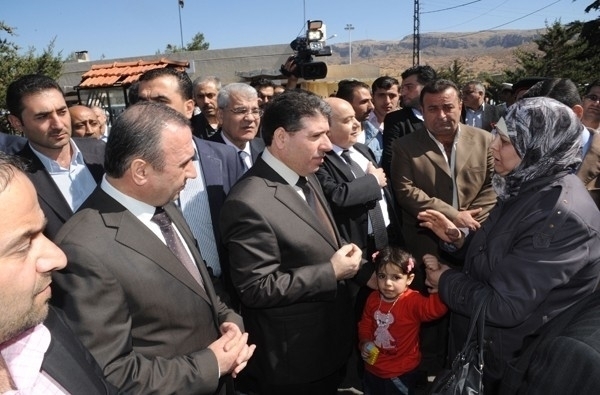 Syria’s Prime Minister Wael al-Halqi stressed on Monday that the return of the displaced Syrians is evidence of their natural ties to their homeland to contribute to the reconstruction process of the renewed Syria.

In a press statement a tour in Jdeidet Yabous border crossing, Halqi pointed out that his tour is aimed at inspecting the work progress and the procedures made to facilitate the arrival and departure of citizens.

He added that the increasing movement of arrivals from Lebanon is a result of the gradual stability of the security situation on the level of all provinces as the reality of the conspiracy has been exposed while the Syrian Arab Army is making major advancements.

The Prime Minister reiterated the call on the displaced citizens to come back home, noting that Syria has room for its entire people and the government is offering all security, legal and administrative guarantees to ensure the return of all displaced Syrians to the homeland.

He added that the government will provide makeshift shelters to all affected citizens while they come back to their residences to contribute to reviving the life cycle, pointing out to the thousands of citizens, mostly women and children, who were evacuated from al-Mouadamiah district during the past two days.

The Premiere stressed the persistence of the Syrian people to adopt the political solution being the only exit from the crisis, noting that the ballot boxes will be decisive among all sides and no one has the right to interfere in the domestic affairs of Syria.