The Homs neighbourhood is under fire from pro-regime militias 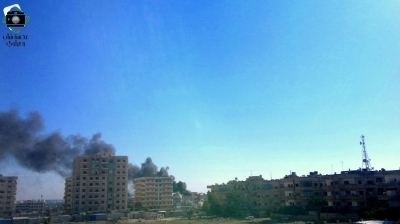 Pro-Assad militia, nicknamed "Shabbiha", or thugs, have breached a truce in the Al-Waer neighborhood in central Homs.

The area was supposed to open all blocked crossings to allow people breaking the siege after 3 week of suffering, local sources told Zaman al-Wasl.

Seven people have been killed, including two women and a child by government artillery shelling on the neighborhood.

Meanwhile, a prominent rebel commander in al-Waer, Abdul Karim al-Adawi was killed during the latest clashes with the Assad army.

Assad's forces, backed by Shabbiha, have tightened their grip on Homs due to its strategic crosspoint linking the capital with army bases in coastal regions controlled by the Alawite sect, an offshoot of Shiite Islam that has dominated majority Sunni Syria since the 1960s.