No way Assad to be part of the transition plan, and he could not regain legitimacy to govern, Kerry says 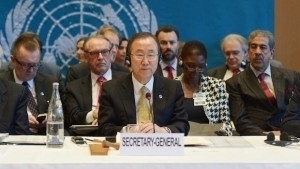 Syrian peace talks kicked off in Switzerland with little hope that it could override clashing stances between key players, the Syrian regime and the opposition, whose presence on the same table for the first time in almost three years resembles the highlight of the conference, according to Al Jazeera.

Syrian information minister Omran al-Zoabi, said on Wednesday that President Bashar al-Assad will not step down, as demanded by some of the international powers seeking to end the country's protracted conflict.

Syrian Foreign Minister Walid Muallem, who heads President Bashar al-Assad's delegation, and Ahmed Jabra, president of the opposition Syrian National Coalition exchanged accusations of treason and terrorism, each holding the other responsible for the violence that has killed more than 130,000 people and displaced millions more.

Muallem, who urged the international community to not interfere in internal affairs, said "whoever wants to speak for the Syrian people must not be a traitor," referring to opposition groups that have been battling the regime in demand for more rights and freedoms.

"We are facing the terrorism of Assad who claims to be fighting terrorism," Jabra said, accusing the regime of killing 10,000 children since the war broke out in 2011.

UN Secretary-General Ban Ki-moon inaugurated the conference by outlining the efforts made – since the first round of Geneva talks took place about 18 months ago – to bring the rival sides together. Last minute developments could have derailed the meeting aimed at ending the crisis that is about to hit its third anniversary.

"The challenges before all of us are formidable, but your presence here raises hope," Ban said. "All Syrians are looking for a Syrian-led transition."

The peace talks are set to be based on a communique reached at the end of Geneva 1 talks , entailing a political transition plan to end a crisis that has killed many.

"Syrians must talk to each other again," Ban said, urging the international community to pressure both sides to reach agreements based on the Geneva 1 communique, and allow for the passage of humanitarian aid to harmed citizens.

While the establishment of humanitarian corridors is a mutual ground between the rival parts, a political transition plan is not. President Bashar al-Assad and his foreign minister Walid Muallem have shown no intention of giving up or sharing power.

US Secretary of State John Kerry, however, said there was "no way" Assad to be part of the transition plan, and he could not regain legitimacy to govern. "The right to run a country does not come from bombs and missiles," he told the participants in the Swiss town of Montreux.

"The stubborn clinging to power of one man," Kerry said, is the only thing preventing the Geneva communique from creating peace.

Russian Foreign Minister Sergei Lavrov, whose country is a staunch supporter of the Assad regime, called for international forces to stop meddling in the country's affairs, saying that Syrians have the right to decide their own future.

"The negotiations will not be simple, they will not be quick," Lavrov told the conference.

The conference is attended by delegations from 40 countries.

Minister Muallem speech at the Geneva II peace talks on Wednesday ran on for 40 minutes, instead of the allotted seven minutes that he and each delegate attending the conference is allowed.

Muallem’s insistence to finish his speech resulted in a brief bickering episode with U.N. chief Ban Ki-moon, when he was asked at the 25th minute to wrap it up.

Muallem responded: "I've come all this way in the airplane to talk about Syria. Give me just few minutes," adding that he needs around 5-10 minutes to finish.

“I’m sorry to… can you wrap it up? You’ve spoken already more than 20 minutes,” Ban said.

“Mr. Secretary, you spoke 25 minutes, I came here after 12 hours in the airplane. I need a few minutes to end my speech. This is Syria,” Muallem added

“Oh no, no … I will give you another opportunity at the end to speak.”

“No, I can’t divide my speech. I must continue,” Muallem said, with Ban asking whether he can end the speech in two minutes. “I can’t promise you,” the minister replied.

“Then I’ll have to give the Syrian opposition the same time.”

“No, no. You live in New York, I live in Syria. I have the right to give the Syrian version [of the crisis] in this forum. After three years of suffering, this is my right.”

“Please refrain from any inflammatory remarks … which will not be constructive at this time,” Ban replied.

To that, Ban allowed Muallem to end his speech – quickly.

But he later interrupted him again when the speech was nearing 30 minutes and Muallem said he would end his speech soon, adding “Syria always keeps its promises.”