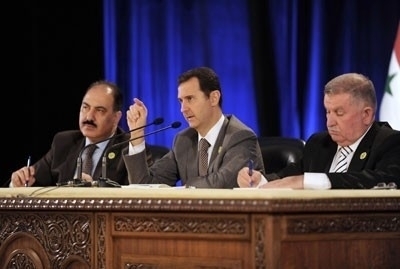 President Bashar Assad said that the strength of the Baath Arab Socialist Party lies in its natural belonging to Arabism and Islam, and in its confrontation of plots seeking to undermine pan-Arab thought.

The president made the statements during a meeting on Saturday with the leadership of the Damascus branch of the Baath party on the 51st anniversary of the March 8 Revolution.

Assad said that as Syrian's vision became clearer and the conspiracy against them became exposed, a climate has been fostered for dialogue and enhanced state efforts towards reconciliation in parallel with combatting terrorism.

Assad pointed out the unique character of the Damascus countryside, saying it required efforts to be focused on the intellectual and ideological,and to channel energies into serving citizens.

He pointed to the role of media campaigns in targeting the Baath Party over the past years to create a state of frustration, along with intensified accusations aimed at denting the Baathists' morale. He said saying that such attempts are countered by the party's efforts in building the Syrian state and bolstering its capabilities during past decades.

Assad said that preserving pan-Arab thought and the real Islam helps safeguard the national identity and counters attempts to sow extremism, noting that the Baath party's broad poular base stems from its pan-Arab belonging.

"We are dealing with a community whose vision now is clearer than ever regarding the conspiracy targeting it, as the crisis has raised political awareness and made mor people keen for debate, giving the party space for movement via logical and rational dialogue," Assad said.

He pointed to the party's ability to stand fast during the crisis, saying that individual defections are the sign of a healthy state that has rid the party of the opportunists and helped it start over with vigor, stressing the need to work diligently to get rid of all opportunists.

Assad highlighted the role of Baathists in the current national reconciliation programs, adding that the Party has to play a greater role and find mechanisms of communication with people that support the state's efforts.

He drew attention to the reconstruction process, especially in the countryside, as one of the most pressing post-crisis challenges, noting that reconstruction will offer a big chance for restructuring affected areas, which provides the owners of houses and estates that have been damaged a chance to improve their living conditions, revitalize investment and create job opportunities.