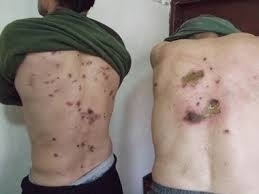 Malik, Murhaf and Ward were waiting for their father to return. They were counting the days on their little fingers, asking themselves when the moment would come. Finally their father, who had been kidnapped by security forces more than ten months ago at a checkpoint would finally be released.

For the three children, the oldest of whom is 11, however, after a long wait,  unfortunatley learned the dreadful news knocking at their door, that their father, Anas, had died in prison.

Anas Omar, 35, was a furniture trader. He was never interested in politics, nor in who' was ruling or who wants to rule the country. He was a decent man, quiet, and dedicated to his career. The situation became unbearable, however in his town in the eastern Ghuota, due to break-ins, arrests, and the massive shelling that destroyed everything, and he had tasted the bitterness of grief when regime aircraft dropped an explosive barrel on his family home, killing his brother.

He moved with his children, his brother's children, and the rest of the family to what was supposed to be a secure place in the capital, Damascus and started preparations to leave the country. For him, there woudl never be a chance to lose another member of the family. But this was not to be a choice for him.

There, in the capital, where military and security checkpoints are lurk everywhere, Omar was stopped one day at one for no reason, other than that he held an ID that declares that he is from Damascus countryside. His car, which he was driving alone, was seized. He was disappeared by force like so many Syrians who are vanished today.

Firas, one of Anas's relatives and our source, says that the family has  no information about the place where Anas was buried nor the truth about his death, or his medical condition which led to his death. They do not know where he was, nor the security branch which kidnapped and arrested him, nor the reason for the arrest.

Firas says that they received a little information from one of the released prisoners, who assured that Omar was alive and living in miserable conditions, medically and emotionally due to the severe torture he endured. Omar had a severe injury to his foot; an acute inflammation had developed caused by brutal beating and his leg had become like a swollen bluish-red lump in the size of a watermelon. In prison, there was no medical treatment for the prisoners, or medicine.

Omar remained suffering under these conditions in his cell until he died. After his death, he stayed for three days without anyone noticing, until the smell of his rotting corpse began to spread through the prison.

All of this information was recorded according to a witness, Omar's cellmate in prision, who was released. He said he heard him groaning every night.

Firas added that the prison administration in such cases, brings people who it calls the "Red Crescent" to take photos of the dead prisoners and dispose of the body without letting anyone else know where the body was buried or even delivering it to family members; the fmailies that still hold on to hope that someday the prisoner will be released.

The witness located Anas's place of arrest at the Alkhatib security branch in the heart of Damascus, despite previous information saying that he might be in the Branch 215. That news do dis not offer any consolation or peace to the martyr's family; his fate remains unknown to them as long as they search for his grave and the truth of his death. the fmaily remain in a dreadful situation with doubts and uncertainty surrounding them.

Some people consider the way the news is delivered to be a new method of torture by the regime, especially since the released witnesses assure they have seen family members detained for long periods during the revolution.It was assumed that those people died in prison, but confirmation that they have been seen suggests they are still alive and enduring dreadful conditions in prison.

A great deal of information is being spread among Syrians today about Bashar Assad's regime and his security devices in handling the prisoners families in a new way – lying to them and  giving fake death certificates so that the families stop asking about their prisoners, or to make them feel safe and talk freely about the prisoner's activities and their connections, in order to obtain additional information about their anti-regime activities.

Recently, the number of martyrs declared dead under torture has escalated. In most of the cases the news come verbally through somebody or by a phone call. Where, when, why, and how? Those will remain questions without answers.

In a summary published by the "Syrian Center for Statistics and Research" recently, the numbers of martyrs who died under torture in Damascus alone during the last March reached 68. Meanwhile, a simple daily follow up to the published numbers of prisoners dead under torture in the hot areas reveals that 15 – 20 martyrs around Syria are dying every day.

There is no revolutionary or human rights organization inside or outside Syria that have specific numbers for the prisoners in the security branches. This is due to the difficulty in accessing all the prisoners and  getting in touch with their families, let alone the serious danger of being charged for authenticating arrests. In addition, families fear of the regime's punishment for giving the names of their sons to organizations. The punishment may include killing the rest of their family members or arrest.

Nonetheless, those numbers are authenticated and documented at the very same Syrian security branches, which own the numbers, the people, and their destinies. On the other hand, manysources indicate that the numbers exceed 200,000 prisoners including women, children, and elderly.

The idea of an arrest is based on a set of goals, including punishing the prisoner, scaring the others, killing their rivals, and making them feel their weakness along with the regime's power to control their destinies, intimidate everyone, and dissociating any group resisting the Assad regime, whether peacefully or armed.

In the long term, the arrest is used to achieve further goals like using the prisoners' files for political pressure on rivals or using prisoners as human shields whenever necessary when breaking in an area or a prison. It is even used as a tool for exchange them with important figures for the regime members kidnapped by the FSA and other armed groups.

In addition to all this, an arrest can be used in order to hand over other members of the family, especially by arresting women and children.

Diverse and brutal ways are used to torture prisoners. All of these methods were authenticated and documented through the testimonies of former prisoners and those released. Recently, 55,000 pictures were published and documented for 11,000 Syrian prisonerskilledunder torture in the regime prisons.

Starving, hanging, cutting organs, deadly beating and, locking people in a small place with predatory animals such as hungry dogs, torturing by electricity, hot water, severe cold, not treating injuries or illnesses are all used a s a means of torture. In addition to all this, there is the emotional torture and rape (for men and women) along with other witnessed methods. All this leads to the same result; death.