Dozens of people have been abducted, kept in prisons, tortured and killed 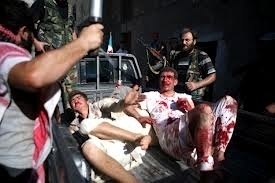 Following up on previous reports, more shocking crimes by Shabbiha gangs have been revealed.

The latest revelations have come via reports the gangs have written about each other, giving them significant added credibility.

Khnaifis, a small town nearby Salamiyah, has been taken by Mosib Salamah’s Shabbiha gang as a headquarters, ruling it in their own way. It has a prison to keep abducted people, where they practise severe torture, whether the prsioners are pro- or anti-Syrian regime. Most often they killed after the gang receives a ransom.

A report written by one of the Shabbiha, revelas details about the abduction five workers from Edlib at the Khnaifis crossing, where they were threatened with arms then taken to the prison in the town. The report mentions the name of Mahmoud Afifa was repeatedly mentioned during the time the hostages spent in prison.

Another three hostages were hedl in the prison, two of them from Deir Al-Zor, while the third was a teacher from Tal Omari village. Surprisingly, he was a member in the National Reconciliation Committee. Afifa demanded a ransom of 4 million Syrian Pounds for his release.  1.7 million SP was paid, while  the rest was negotiated, before the hostages managed to escape to shelter in a nearby village.

When Mosib learned of the hostages’ escape, he claimed that armed groups were hiding around Khnaifis, and requested use of a canon to bomb the area, aiming to kill the hostages. The bombing took place without any questioning.

in another crime committed by Ali Hamdan and Mosib, two hostages were killed after they were arrested when their BMW was stopped by Hamdan's men. It was discovered that two men were carrying large sum of money and U.S. dollars. Hamdan sent the two men to Mosib, and started using their car claiming that Mosib had bought it. However, Mosib demanded the car to be brought to him, to sell later in Latakia, before  getting rid of its owners.

Other crimes reported against Hamdan include that he stole money from shoe sellers, then killed them and burned their bodies.

Dozens of people, men and women were abducted, kept in prisons, tortured and killed. Many times the killing took place even after receiving the ransom.