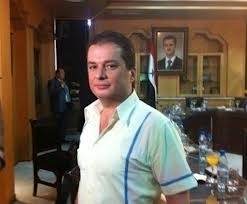 MP Maher Abdul-Hafiz Hajjar has submitted to the Supreme Constitutional Court an application announcing his candidacy for President of the Republic, becoming the first to run for the presidency of Syria in the upcoming election, scheduled for 3 June.

The Speaker of the People's Assembly, Mohammad Jihad al-Laham announced in a session on Wednesday that the Assembly had received from the Supreme Constitutional Court a notification that MP Hajjar submitted a candidacy application to the Court on 22 April 2014 along with the enclosed documents required by Article 21 of the Court's Law.

The application of Hajjar was registered as the first in the Court's own register.

Laham noted that the Assembly also received a note from MP Hajjar announcing his candidacy for president along with the required documents. Hajjar was provided with an official written note to this effect by Chief of the Supreme Constitutional Court Adnan Zreiq, Laham added.

Hajjar's candidacy announcement allowed the MPs to be informed so as to give approval to the candidate if they so choose.

A candidate needs to get a written nomination to run from at least 35 members of the People’s Assembly, otherwise his candidacy application will be dismissed. MPs are allowed to nominate to only one candidate.

Hajjar was born in Aleppo in 1968. He comes from a family well-known in religious teaching.

Hajjar obtained a diploma in Linguistic Studies from Aleppo University before he joined the Syrian Communist Party in 1984. He seceded from the party in 2000 and formed a temporary leadership for Aleppo’s communists.

In 2003, he formed, along with many communist leaders, the “National Committee for the Unity of Syrian Communists” and was one of its leaders until it changed its name to the “Popular Will Party”, when he became the Secretary of the Party’s Council.

He ran and failed in the 2007 People’s Assembly’ elections and officially opposed the results.

During the crisis he ran again for the parliamentary elections in 2012 for Aleppo city within the list of the Popular Front for Change and Liberation and won and came second in the number of votes for independent candidates.

Hajjar is married and has one daughter.

Hajjar's candidacy announcement came a day after the Supreme Constitutional Court said it was ready to receive candidacy applications for the presidential election.

Registration for presidential candidates was declared open Monday by Speaker Laham, during a session that was attended by Prime Minister, ministers and representatives of local, Arab and foreign media.

Candidates can continue to submit applications through Thursday, 1 May, 2014.