Services and utilities are being restored in the city 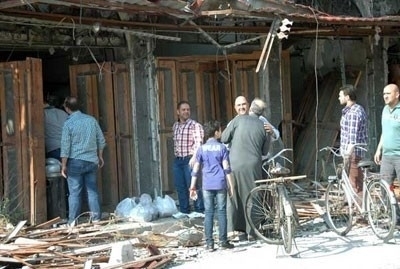 Life has returned to downtown Homs with residents coming back and services restarted.

Homs residents continued a return to their hometown on Sunday, walking the streets again now that they are free of gunmen and terrorists, and inspecting their homes, shops and properties.

Suhaila Jabboura from the Hamidiyeh neighborhood said she was driven out of her home by terrorists over two and half years ago, and that she and her family were pained to leave the place where they were born and raised. She said their return brought feelings of joy mixed with dismay at the damage done to their home by terrorists.

Abdelaziz Sabbagh from the Bab Houd neighborhood said that despite all the tragedies and ordeals they had expereinced, the people of Homs had stood fast, vowing to rebuild all that was destroyed by the terrorists.

Ahmad Kousa, a lawyer whose office in Jouret al-Shiyah neighborhood was destroyed by the terrorists, said that no matter what they do, terrorists will never be able to uproot the people of Homs.

Father Ziyad Hilal from the Jesuit Fathers Convent in Bustan al-Diwan neighborhood was happy to return to the convent which was his home for many years. He expressed sadness over level of devastation in the city, including the convent and the school.

Hilal said that as soon as he and other clergymen returned to the convent, they visited the burial place of Father Francis van der Lugt and held prayers. He also called for continuing reconciliation efforts in Homs.

With residents returning to their homes, services and utilities departments in the city are restoring life to the city.

The head of Homs City Council Nazzem Tayyara said that as soon as Homs old city was declared secure and clear of gunmen, the Council's maintenance team began clearing rubble and debris from roads and streets, opening roads and working diligently to ensure that all streets are cleared and repaired.

Director of the Homs Health Department, Hassan al-Jendi, said that damage to the health sector caused by terrorists in the city is estimated at over 2 billion SP, with the National Hospital being completely vandalized and ransacked, as terrorists stole all equipment, supplies and even its 600 beds.