The delegation met with Egyptian Foreign Minister and the dialogue was held about the fate of the political solution after the resignation of U.N. envoy Lakhdar Brahimi 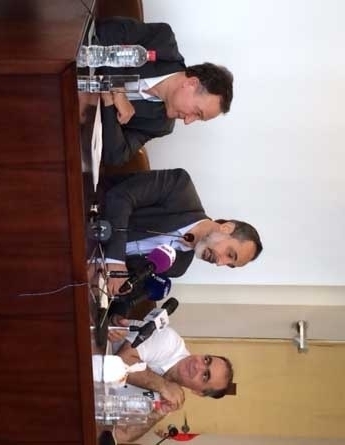 Opposition leader and a member of the delegation visiting Cairo this week, Haytham Manna, said that the delegation of Syrian opposition figures came in response to an invitation from the Egyptian Foreign Ministry, decided during a seminar and discussion on the Syrian situation and the fate of the political solution.

The opposition leader did not refer to any new initiative or solution for the Syrian crisis.

He said the seminar was held at the headquarters of the Council, and for the first time since the start of the movement in Syria, several figures belonging to different streams participated together on a single platform.

"The delegation also met with Egyptian Foreign Minister Nabil Fahmy, and the dialogue was about the Syrian situation and the fate of the political solution after the resignation of U.N. envoy Lakhdar Brahimi," Manna said.

The Syrian opposition figure referred to a statement issued by the Egyptian Foreign Ministry which reported that the meeting between Fahmy and the delegation of Syrian opposition "discussed the developments in the Syrian crisis and the potential for reviving efforts to reach a political solution to the conflict in Syria following the cessation of the political process, which began at the Geneva Conference last January.

"Discussions also dealt with the need to move the Arab and international role more actively for this file which is vital to Arab national security, especially in light of the multiplicity of issues that preoccupies the international community," the statement said.

"The Syrian figures have offered a vision of how to get rid of the daily tragedy suffered by the Syrians through a cooperation between all political forces which represent the Syrian society, as well as through cooperation with Arab powers and international friends of Syria, in light of the need to concert efforts of everyone to find a solution that ends the three-year conflict in Syria," the statement added.