Alloush was speaking at a press conference in Duma 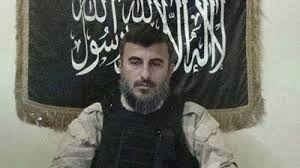 The commander of the Army of Islam, Zahran Alloush, said ISIS is an enemy of the nation and the revolution, and that he believes the organization is a criminal faction linked to Iranian and Syrian intelligence.

On the fate of the activist Razan Zeitouneh, who was kidnapped in Eastern Ghouta, Alloush said that the Army of Islam investigated the case and that the kidnapping of Zeitouneh harms the revolution and does not serve its interests, but those of the regime.

Alloush confirmed that the Army of Islam does not have security or military headquarters close to where Zeitouneh and her friends were kidnapped.

Regarding reports of prisoner exchange negotiations between the Army of Islam and the regime, Alloush said "we do not mind exchanging our prisoners with regime’s prisoners. We have received offers from agents to negotiate and we agreed, but the regime is procrastinating".

Alloush was speaking at a press conference in Duma, attended by prominent activists, journalists and media channels and newspapers. he discussed the rapid developments in the region, saying that the war against ISIS has started, and that any commander in ISIS has become a legitimate target, except in the case of surrender.

Most questions focussed on recent events between ISIS and the rebels, the possibility of further clashes with ISIS and whether eliminating ISIS within the Ghouta will affect the fronts of Maliha and Jobar.