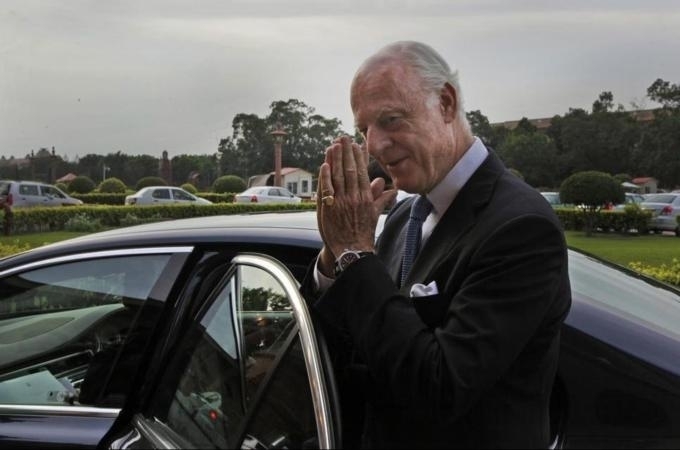 The move comes amid worsening violence as the Islamic State group seizes large areas of Syrian and Iraqi territory.

De Mistura, 67, has worked with the UN in Somalia, the Middle East, the Balkans, Nepal, Iraq and Afghanistan during the past three decades. He was most recently the UN special envoy in Afghanistan in 2010 to 2011.

In May, de Mistura was appointed president of the board of governors for the European Institute of Peace, an independent Brussels-based foundation that conducts mediation and informal dialogue to promote the global peace agenda of the European Union.

He speaks seven languages including colloquial Arabic, according to the Italian Foreign Ministry.

Brahimi, an Algerian diplomat, stepped down on May 31, frustrated by the global deadlock over how to end Syria's three-year civil war.

His resignation came just days after Bashar al-Assad was re-elected as Syrian president in a June 3 poll described by Ban as a blow to international efforts to end to the conflict.

He had long threatened to quit, as did his predecessor, former UN Secretary-General Kofi Annan, in 2012.

Annan resigned after six months as the UN and Arab League joint special representative on Syria, accusing the UN Security Council of failing to unite behind efforts to end the fighting that has now killed around 160,000 people, according to the Syrian Observatory for Human Rights. Al Jazeera is unable to verify this figure.

The UN says 10.8 million people in Syria need help, of which 4.7 million are in hard-to-reach areas, while three million others have fled the conflict.

It was not immediately clear if de Mistura would be a joint UN and Arab League envoy.

Ban met Nabil el-Araby, head of the Cairo-based Arab League, in June to discuss whether a new appointee would still be a joint representative.