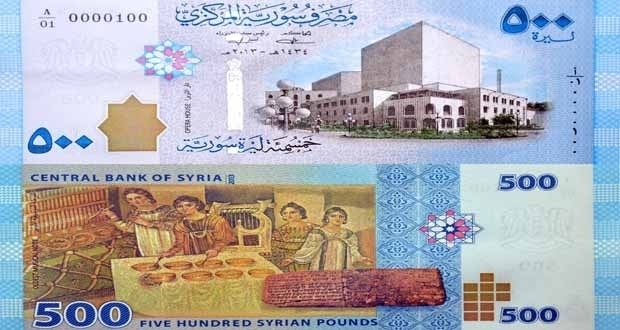 The Central Bank of Syria (CBS) put new banknotes of 500 Syrian Pounds in circulation on Sunday, to be dispersed early next month.

The Governor of the bank, Adib Mayala said with the new notes released, the old notes will be gradually withdrawn from the market so as to avoid disruption to the exchange and inflation rates.

The new banknotes, Mayala noted, are different in color, size and the printed images now depict the Syrian Opera House and a mosaic of the first music note in the world.

The new banknotes are charecterized in terms of security by high-precision micro-perforation featuring 500 SP that becomes visible when the banknotes are viewed through light.

Another notable characteristic is that of flexographic presses that enable people with special needs to recognize the banknotes.

Mayala pointed out that Syria does not have the ability to print the new banknotes, revealing that a new 1,000 SP banknote will be produced in two months.