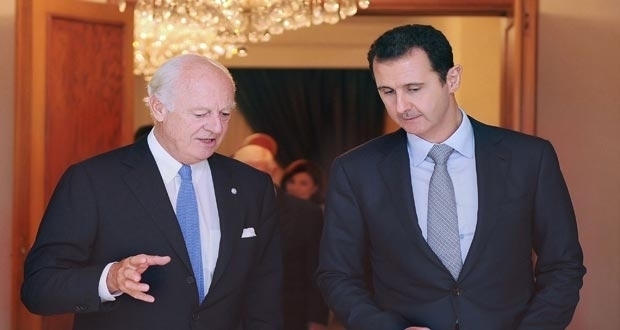 President Bashar al-Assad told U.N. Special Envoy for Syria, Staffan de Mistura, that the Syrian government is ready to provide the necessary support and cooperation to make his mission a success in a way that serves the interest of the Syrian people and to reach a solution that ensures the elimination of terrorism and the various terrorist organizations.

During a meeting with the international envoy and the delegation accompanying him on Thursday, the president stressed that the success of de Mistura’s mission would be a success for Syria and its people.

President Assad said events in Syria and the region have made combating terrorism a priority. He said terrorism has become the greatest danger threatening everybody.

Assad added that any progress that could be achieved in combating terrorism would contribute to boosting national reconciliations which have so far succeeded in many areas across the country, forming a springboard towards a comprehensive inter-Syrian dialogue.

A positive atmosphere prevailed in the meeting, especially in terms of discussing the recently-issued international resolution no. 2170 on combating terrorism. The views of both sides were concurrent in terms of agreeing on the importance of the resolution and the need to implement it correctly.

De Mistura confirmed that he will spare no effort in working with all sides inside and outside Syria with the aim of finding a peaceful solution to the crisis in the country through a political process in parallel with fighting terrorism and going ahead with the national reconciliations.