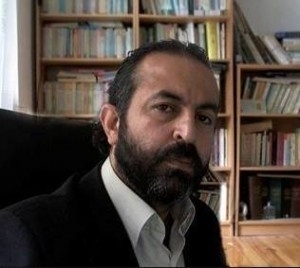 Leader of the Modernity Party, Firas Qassas, has continued a nine-day hunger strike in solidarity with the city of Ayn al-Arab, known in Kurdish as Kobani.

"In solidarity with our heroes in Kobani, and in condemnation against all the regional and international powers which still stand by and watch the criminals of ISIS seize the city of enlightenment, freedom and co-existence, I announced an indefinite hunger strike," Qassas said.

"I apologize for the deficit which prevents me from providing what is tangible in these fateful moments, while the forces of darkness and evil are clashing with the forces of enlightenment and good," he continuhed in a statement to All4syria.

Qassas declared the strike from the city of Berlin, where he lives. The activist Lama Tawfiq al-Atassi joined him. Lama carried out a hunger strike for eight days, but she stopped because of her loss of consciousness. Qassas had carried out more than three strikes and sit-ins previously in solidarity with the cause of the Syrian people and to protest against the practices of the Syrian regime.