Snowstorm in Lebanon kills three Syrians, including one child 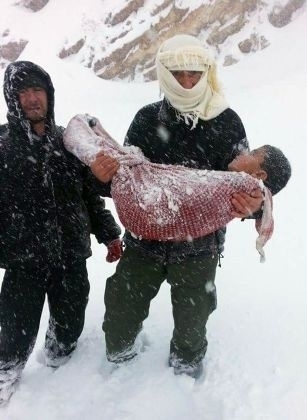 Syrian shepherd, Ammar Kamal, died in Rashaha after a deadly snowstorm that hit Lebanon, Syria and other countries in the Middle East, the Lebanese National News Agency reported.

An 8-year-old Syrian child also died while with his father and his brother crossing  the Jerdah-Shebaa road, while another Syrian died at night on the rugged mountainous road between Syria and Shebaa.

Rainfall and floods entered the tents of displaced Syrians residing in the towns of Sheikh Abbas and Sumakhiyyeh, north Lebanon. Rainwater entered the tents, causing the occupants to suffer the bitter cold throughout the night.

Displaced Syrians in Sidon, south of Lebanon, spent a difficult night without means of heating, while rainwater entered a number of rooms in Awzaa'i and Alayli.

Snow covered around 40 tents in Majdelyoun near the city of Baalbek, with camps were cut-off from all communication due to the storm, AFP reported.

"There is shortage of food and heating. We ask all the non-governmental organizations to intervene. We are afraid that the tents will collapse under the snow", a Syrian refugee told AFP.

Refugees in Hosh al-Umaraa near the city of Zahle, where temperatures dropped to three degrees Celsius, scrambled to remove snow from tents out of fear of collapse.

”We are barely able to walk in the snow. I’ve lived here two years, but this winter is the coldest", said Mohammed Hussein, who lives with his wife and five children in one of the camp’s tents.

The strong storm hit Lebanon and the Middle East, prompting authorities in several countries of the region to take preventive measures, asking citizens to remain indoors or avoid mountain roads.

The storm stopped passage through many mountain roads in Lebanon, making access to Syrian refugee camps a difficult process in several areas.

Lebanon has received over 1.1 million refugees fleeing the bloody conflict in neighboring Syria since mid-March 2011, in which over 200,000 people have been killed, according to figures provided by the Syrian Observatory for Human Rights.