A new program near Hassakeh aims to provide a safe place for the displaced, while also defusing Arab-Kurd tensions 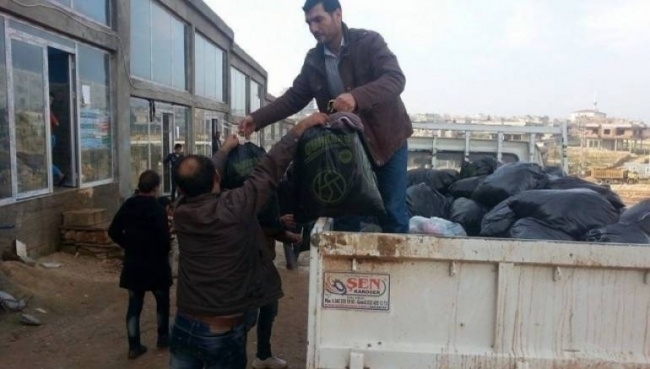 “Say no to sedition, yes to the Arab-Kurdish brotherhood – we have the same wound”, is the cry of an initiative helping displaced people in the north east of Hassakeh.

The suffering of displaced people has worsened since extreme weather and snow recently hit the region.

“We have an urgent goal to assist displaced people in the region, since most of them live in inhabitable houses, with no windows or doors or any source of warming, after they were forced to leave their own houses because of battles”, Roya Mao’o, one of the initiative’s supervisors, told Zaman al-Wasl.

She added that most displaced people lack any source of food, collecting waste and garbage from vegetable and fruit markets, as well as the risk of dermatological and respiratory diseases, as it is common to burn unhealthy materials for warmth.

Roya claimed that organizations responsible for the distribution of aid continue to prioritize certain groups according to ethnicity and political loyalties, increasing the divide within the community.

“Therefore, our initiative aims to defuse the tension between Arabs and Kurds, which is our second main goal”, she said.

Aziz Biro, manager of the initiative, explained to Zaman al-Wasl that inspiration behind the initiative came from the story of Mohammed Abdullah, who lost his two feet in the cold last year. Mohammed was living in a cows' stable without heating facilities, and the chronic constriction of blood vessels in his feet eventually lead to ischemia and gangrene, later requiring amputation.

“Now the boy’s family, together with 70 other families, are living in an under-construction building close to the hospital. 300 other families are also being housed inside other buildings”, says Biro.

Besides attempting to reduce tensions between Arab and Kurds, the initiative insists its goals are purely humanitarian.