Six people killed, 24 injured as a bus targeted by terrorist bombing in Damascus 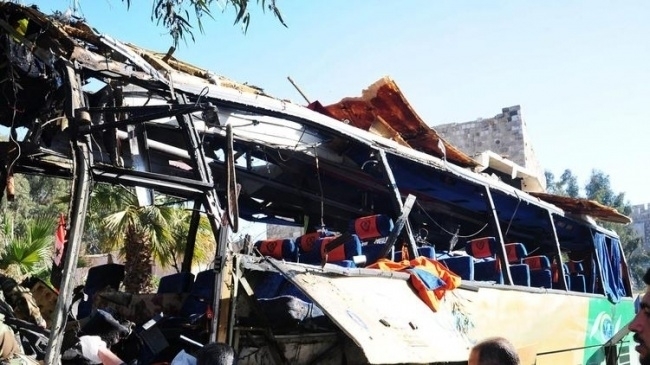 Terrorsits detonated an explosive in the front part of a bus in al-Kallaseh area of Damascus city, leaving six people dead and 24 others injured, according to a source at the Police Command.

Engineering unit members defused another 5 kg explosive device, which was found inside a bag placed on the floor of the bus, the source was quoted as saying.

SANA reporters said the bus’ front was ripped off due to the blast, while material damage was caused in area surrounding the blast site.

A medical source at Damascus Hospital said at least 12 people were admitted to the hospital, some of them are in a critical condition, adding that a 3-year-old boy was among the injured.

Another medical source at the Red Crescent Hospital said it received three injured people, while another injured person was taken to al-Mouwasat Hospital.

Health Minister Dr. Nizar Yazigi, who visited Damascus Hospital, said the injured from the blast are “in a good and stable condition after they were administered the necessary medication.”

Most of the casualties are Lebanese whose wounds vary in severity, he added, considering the attack “an indication of the terrorists’ bankruptcy.”